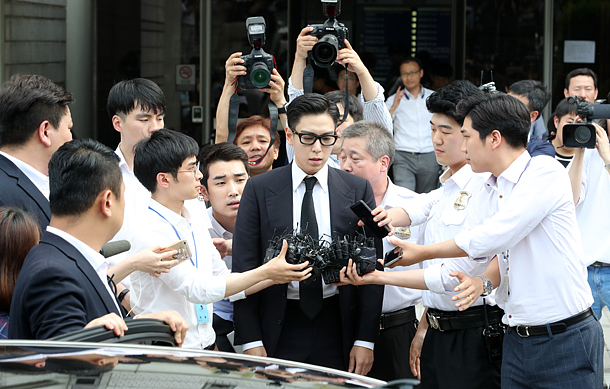 T.O.P. of boy group Big Bang is flooded by reporters as he heads out from the Seoul Central District Court in southern Seoul yesterday. He was sentenced to two years of probation after he admitted to smoking marijuana.[YONHAP]

Rapper T.O.P. of Big Bang, real name Choi Seung-hyun, who was investigated by police in April for allegedly smoking marijuana four times last October, was sentenced to two years of probation on Thursday.

At the sentencing held at the Seoul Central District Court in southern Seoul, Choi, who has been charged with violating the Act on the Control of Narcotics was sentenced to 10 months of imprisonment, two years of probation and a fine of 12,000 won ($10.65).

The punishment is the same as what the prosecution demanded at the first trial held on June 29. The justice department reasoned their decision on Thursday by saying, “Choi has admitted to smoking marijuana four separate times. He has disappointed a host of fans with his crimes. We took into account Choi showing full remorse for his actions, vowing to never commit crimes against and him being a first offender.”

Choi will serve no prison time unless he commits a crime during the two-year probation period, but his official records will state that he received a punishment equal to two years in prison.

The fine of 12,000 won, which has been a point of intrigue by spectators, is the result of the justice department pricing the transaction price of a single dose of marijuana at 3,000 won.

As the rapper admitted to smoking marijuana four times, twice in blunt form and twice in liquid form, he has been fined 12,000 won.

T.O.P was subject to a hair follicle test in April after the narcotics unit of the Seoul Metropolitan Police Agency was informed in March that the rapper had smoked marijuana. The rapper was indicted after the results proved positive in early June.

During investigations, which began in April, he denied ever smoking marijuana, but later altered his answer to say that he did smoke twice.

He still denied smoking it in liquid form at the time.

He went back again on his word in the first hearing after he admitted to all the charges presented by the prosecution.

As the rapper was indicted while serving his mandatory military service as a conscripted policeman since February, his service had been suspended and he was relieved of duty on June 9 according to police rules. Since the duration of his sentenced imprisonment is below 18 months, he will be able to continue his service, though the whereabouts and the date of his return haven’t been decided as of yesterday, as it takes a week to file for an appeal after sentencing.

A source close to the rapper said the Seoul Metropolitan Police Agency will go through a re-examination of his case. He currently has 520 days of mandatory military service remaining.