A new market takes off in Korea

A new market takes off in Korea 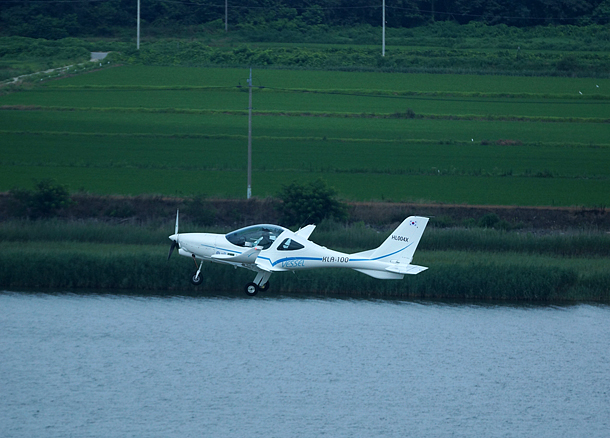 GOHEUNG COUNTY, South Jeolla - The first light-sport aircraft made with Korean technology took off on its inaugural flight from the Aviation Center here on Thursday.

Mass production of the plane is scheduled to start either next year or this fall at the earliest.

Light-sport aircraft refers to small planes that carry one or two people and tend to be used for leisure. The plane unveiled on Thursday, the KLA-100, is significant in that most of the technology and components were developed in Korea. The project was initiated by the Ministry of Land, Infrastructure and Transport, and the technology was developed by Konkuk University in Seoul in partnership with local small and medium-sized businesses. Launched in 2010, the project involved 27.9 billion won ($24.8 million) in investment.

The KLA-100 will go for cheaper than most light-sport aircraft, at a price tag of 150 million won compared to around 180 million won. The global market for such planes is currently dominated by U.S. manufacturers, which account for 80 percent of the share.

Although Korean companies have developed technology for military planes suitable for export, they have been relatively slow at creating light aircraft for consumer use. One of the project’s goals was to encourage the private sector to develop technology for manufacturing light aircraft. The government hopes this can lead to the growth of relevant industries like aircraft maintenance and help establish a base for Korean companies to export light aircraft in the future. One company called Vessel, for example, originally made assembly lines for display panels but developed lines to help manufacture KLA-100 components.

Although the history of light aircraft in Korea is short, global demand has been growing, with the market expanding from 2 trillion won in 2010 to an estimated 3 trillion won this year. The United States and Europe are the leading markets.

Vessel CEO Seo Ki-man expects the Asian market to grow rapidly. “Last year, the Chinese government announced plans to establish infrastructure for light planes across the country,” he said. The company is also looking into Southeast Asia for potential demand, given the region’s abundant islands.

KLA-100’s manufacturers are waiting for the government’s final approval to mass produce the two-person plane. The approval is expected to come in September.

Next year’s plan is to establish a manufacturing capacity of 20 planes and gradually expand it to 80 per year by 2022. The ultimate goal is 150 planes per year.

A remaining task to boost the local consumer market for light aircraft is establishing more landing strips and airfields. The planes also require regular inspections and maintenance, which also calls for infrastructure to be established.

“The development [of light planes] in Korea is sluggish considering our income level,” said Lee Jae-woo, a professor of aerospace engineering at Konkuk University who is a core member of the research team. “My opinion is that demand will suddenly grow once Koreans’ average income exceeds $30,000 per year.”