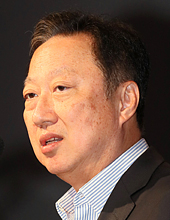 Park Yong-maan, chairman of the Korea Chamber of Commerce and Industry, a business lobbying group, proposed Thursday that the progressive government under President Moon Jae-in consider other factors when raising the country’s minimum wage, especially if the administration is really intent on supporting low-income earners.

The former chairman of Doosan Group, the country’s 13th-largest conglomerate, argued that the government’s plan to raise the minimum wage by 16.4 percent next year to 7,530 won ($6.70) - the largest increase since 2001 - only took into account hourly base pay and fixed monthly allowances. It did not include expenses like insurance policies, holidays and food stipends that are provided by the company.

Park said this did not reflect the government’s goal of helping low-income workers.

“Different companies have varying salary structures,” he told reporters at the annual Jeju Forum hosted by the chamber of commerce on Jeju Island. “Some provide fairly high salaries, but their base salary is abnormally low. If the new minimum wage system is applied though, the salary level goes up en masse, which translates to unnecessarily high burden for management.”

When asked about his opinion on the Moon administration’s “fourth industrial revolution” imitative to upgrade the nation’s technological prowess, Park said the government needed to “deregulate” on a large scale based on social consensus and urged the government to develop necessary infrastructure that private companies find burdensome to build.

Regarding the United States’ demand to renegotiate its free trade agreement with Korea, the chairman said there was no other solution than asking for an “amendment” or “modification” and that if neither works, it should be “nullified.”

“The basic spirit of free trade should be negotiating toward maintenance, which means it is highly likely that both nations reach a consensus that the entire pie [of trade] should be augmented,” he said. “What’s ideal would be expanding the volume of products brought in from the United States to Korea, rather than reducing our exports to the United States.”

The Korea Chamber of Commerce and Industry is in the midst of arranging President Moon’s first meeting with conglomerate heads. Park said the lobbying group, the Blue House and other government organizations are discussing the schedule.