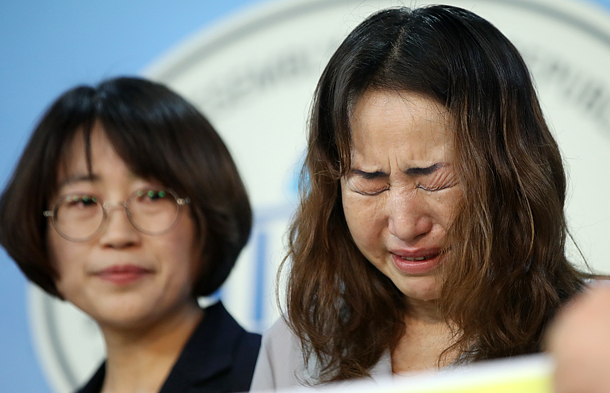 A former franchisee of Wise Reader, a chain of English study centers, sheds tears during a press conference on the company’s business malpractices at the National Assembly on Thursday.

Wise Reader is accused of producing false advertisements to attract potential franchisees. The company promises high-quality English teachers and education programs, including a digital quiz, but it has been reported that not only are the teachers sent from headquarters subpar, the company’s materials are littered with grammatical errors and misspelled words.

Many franchisees claim they have suffered huge financial losses due to the low quality of Wise Reader’s programs, and many are drowning in debt. Around 10 former owners have reported the company to the Fair Trade Commission, Korea’s economic competition regulator, for investigation.

On the same day, franchisees of Pizza Etang filed a lawsuit against headquarters, accusing the company of illegal surveillance and creating a blacklist of franchisees deemed a threat. The franchisees said the headquarters canceled contracts in retaliation against owners who wanted to form a union.

There are over 5,000 franchising companies in Korea, and many have been found to engage in unfair business practices like forcing stores to buy ingredients at prices higher than the average market rate. [YONHAP]