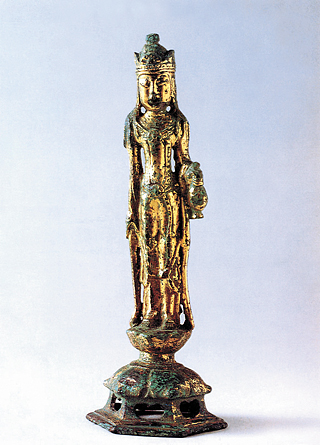 The statue is said to have been found in Gongju, South Chungcheong.

The statue, which displays a style prevalent during the Baekje Period (18BC-660AD), wears a semi-circle-shaped crown adorned with floral patterns, with an usnisa (symbolizing supreme wisdom) displayed atop the crown.

The square-shaped face has an unsmiling, stern look.

The thin, close-fitting robe displays the curves of the body, but the lines expressing the robe wrinkles are not clear.

This type of robe adornment, which was in vogue in ancient China, is featured in many gilt-bronze Buddha statues made during the late Three-Kingdoms Period (57 BC - 668 AD).

The hexagonal pedestal on which the statue stands is carved with lotus flower patterns facing upside down.

The fully blown lotus flowers with wide leaves, inscribed on the bottom stone of the pedestal, carry the unique style of the Baekje Period.

Many parts of the body have become rusty, but the gold still looks splendid.

The entire body suggests a softness unique to Buddha statues made during the Baekje Period.