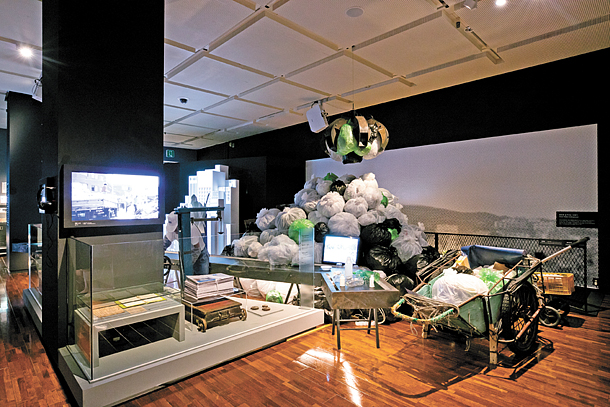 Visitors to the “Junk X User’s Guide” exhibition currently being held at the National Folk Museum of Korea can witness how much trash gets produced every day and how it gets processed and dumped in landfills in Exhibition Hall 1. [NATIONAL FOLK MUSEUM OF KOREA]

A special exhibition at the National Folk Museum of Korea gives insight into the side effects of today’s consumer culture.

Through an exhibition titled “Junk X User’s Guide,” the museum attempts to raise awareness of how much garbage is produced every day and the serious environmental damages it causes, while encouraging people to be more conscious about recycling and up-cycling.

“In the past, Koreans were ardent recyclers,” said Kim Chan-ho, who curated the exhibition. “[For example,] flour sacks that were donated by the American Army during the Korean War were turned into pants.”

The ways in which people of the past recycled and re-used many objects is on display in the second section of the exhibition. Here, visitors can also learn about how Koreans repaired and mended broken objects to use them for as long as possible.

“At that time, we had so many repair shops that could repair anything from your ripped rubber shoes, broken electronics to straightening bent nickel pots and so on,” Kim said. “But today, it’s so easy for us to throw things out and buy something new.”

In this section of the museum, an umbrella repairman comes every Saturday afternoon to repair broken umbrellas for free. According to the museum, more than 40 million umbrellas are thrown out in Korea every year.

There’s also a “Garbage Wall” in Hall 2 that displays thrown out objects that can still be used and even national treasures that were once thrown out, but “thankfully, were discovered before getting destroyed.”

For example, there are intact plates and coffee cups without any cracks from dishware company Royal Copenhagen that were found in the garbage. According to the museum, an employee of the museum picked it up in the trash zone of her apartment and brought it in for the exhibition.

From left: The ways in which Koreans recycled and reused objects in the past can be seen in Hall 2; socially conscious deisgn group Jejudojoa displays its up-cycled jewelry created from trash obtained by beach-combing; and Dasan Jeong Yak-yong’s “Hapicheop” (Treasure No. 1683-2), a calligraphy album he wrote to his sons while in exile in 1810, which was found in the garbage 50 years after it was lost. [NATIONAL FOLK MUSEUM OF KOREA]

As for the national treasures, there’s Dasan Jeong Yak-yong’s “Hapicheop,” a calligraphy album he wrote to his sons while in exile in 1810.

According to the museum, the album was handed down generation after generation, but went missing during the Korean War (1950-53). It was found 50 years later, in 2004, in the handcart of an old woman picking up scrap paper for living.

“It is now designated as one of Korea’s national treasures, but it was once among a pile of papers that someone threw out without much consideration,” said Kim.

Meanwhile, Hall 1 shows how Korea began to promote consumerism and the use of disposables after its industrialization, which became a major cause behind the increase of trash in the country. It also shows the process of how trash gets collected and dumped into landfills.

To encourage people not to purchase new products and throw out the old, the museum offers a platform for visitors to exchange their reusable bags and toys they no longer want.

The museum decided to hold the exhibition about this global issue in a partnership with the Museum of European and Mediterranean Civilisations in France.

“I think there’s a fine line between trash and treasure,” said Kim. “Objects that could’ve been trashed by our ancestors were kept and they are now regarded as relics that help people of today learn about the past. So I think this exhibition, although some say it is too heavy, is a perfect issue to talk about at the national museum.”