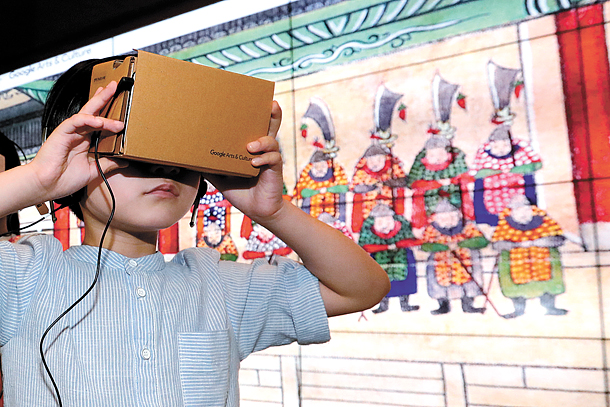 A young visitor to the museum uses a VR headset to take a closer look at paintings at the National Museum of Korea’s Children’s Museum. [YONHAP]

The National Museum of Korea brings the past into the future this summer with virtual reality-powered exploration of global landmarks and artifacts for young museum visitors to enjoy.

The museum, together with Google Arts & Culture, organized a pop-up museum for children, allowing them to enjoy cultural artifacts from Korea and landmarks from around the globe through a number of interactive activities. Putting on the VR headsets, visitors will be able to view details that are too small for the naked eye to see in a painting from the Joseon Dynasty (1392-1910).

The exhibition is divided into four sections. The first section allows children to draw using the so-called “tilt brush,” which is a 3-D painting application that allows users to draw on a virtual canvas. There’s also a section where visitors can zoom in and out of images, such as the portrait of Lee Ha-eung, the father of Gojong.

In “The World You Can See Without Being There,” children can visit places around the world such as the Bolshoi Theater in Moscow, and the Taj Mahal.

The pop-up museum is part of a project launched by Google Arts & Culture in 70 countries, providing museum visitors with the latest technology including VR, 360 degree cameras and high-definition imaging, so that they can virtually experience museums around the world.

Laurent Gaveau, head of the cultural institute at Google, said that the goal of this project is to “act as a bridge between technology and art.”

According to the museum, “this exhibition will provide children an opportunity to have a deeper understanding of arts and culture and familiarize themselves with museums through technology that they will soon be familiar with.”

Admission is free and the exhibition will be open until Aug. 27 at the National Museum of Korea’s Children’s Museum.