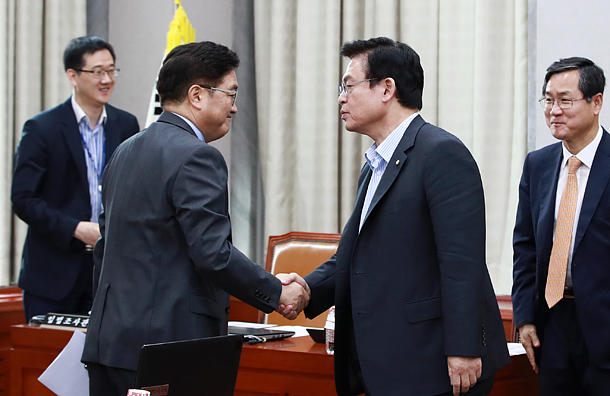 The bill was passed with 182 lawmakers voting in favor, five opposing and 34 abstaining.

With the passage of the bill, the nascent government will have the administrative structure it sought to achieve. A closer look into the reorganized government structure gives a glimpse into Moon’s policy agenda as well as his attempts to erase remnants of the former Park Geun-hye government that was disgracefully ousted in March.

Among the major changes to take place are an elevation of the Small and Medium Business Administration, which aims to assist and strengthen such companies, to a ministry named as the Ministry of Small and Medium Business, Venture and Enterprise. Such elevation is in line with Moon’s campaign pledge to level the playing field for small to medium size companies to co-exist and compete with larger companies.

In what is seen as a sign of Moon’s attempt to erase signs of the previous Park government, the Ministry of Public Safety and Security will be dissolved less than three years after the ousted President Park created the ministry in November 2014 in the wake of the sinking of the Sewol Ferry that occurred seven months earlier. To fill in the role, what can be roughly translated as the public safety and emergency countermeasure center will be set up under the public administration and safety ministry. The Ministry of the Interior will be renamed as the Ministry of Public Administration and Safety, regaining the old name that was last used nine years ago.

The Ministry of Science, ICT and Future Planning will also be renamed as the Ministry of Science, Technology, Information and Communications. Under the reorganization, the Coast Guard and the fire service will function as independent bodies. The rank of the chief of the patriots and veterans ministry will be elevated to a ministerial-level from a vice-ministerial one, giving current head Pi Woo-jin, a former female helicopter pilot and career military service member, a strong mandate to push through her agendas. Pi was handpicked by Moon in his first days in office and her appointment was seen as a crack in the glass ceiling in the male-dominated Korean society. With the new government reorganization, the Moon government will have 18 ministries, up by one from 17 ministries set under the Park government.

While the parliament passed the reorganization plan, the ruling and opposition did not reach a conclusion on the debate involving the transfer of water management entirely to the Ministry of Environment. The water management authority has so far been shared by the environment ministry and land ministry but the Moon government wants it entirely controlled by the former. The opposition objected to the idea that the nation’s water control would be managed solely from an environmental perspective. The ruling and opposition agreed to continue their discussions on the matter.

The ruling Democratic Party (DP) is also at odds with the three major opposition parties over the government’s ambitious supplementary budget bill worth $10 billion aimed to create jobs. At the center of dispute is the government’s earmark of 8 billion won ($7.1 million) as part of the extra budget for the 12,000 new public sector jobs, which drew strong backlash from the opposition, namely the Liberty Korea Party.

While the DP wants to hold a voting session on Friday to pass the $10 billion supplementary budget bill, it is up in the air whether it can narrow down the differences with the opposition or muster enough votes to pass the bill, even if the session is to be held. Once the bill reaches the floor, a majority of 299 lawmakers must attend the vote. Of the cast votes, a majority is required for passage. The DP has 120 lawmakers in the assembly.