Calls for higher taxes directed at the Blue House

Calls for higher taxes directed at the Blue House 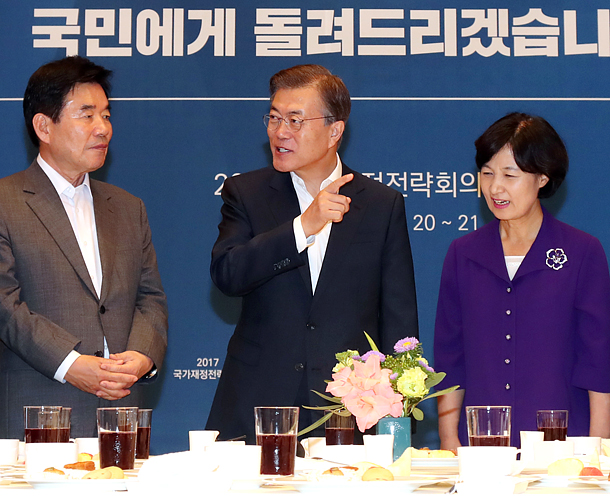 President Moon Jae-in, center, chats ahead of an economics meeting Friday at the Blue House. [YONHAP]

The idea of raising taxes is dividing cabinet members and even the administration and the ruling party.

President Moon Jae-in’s five-year economic plan announced earlier this week didn’t say precisely how it will afford a budget to boost the sluggish economy and create new jobs. It did not call for higher taxes.

However, some bigwigs are calling for just that.

Minister of Interior Kim Boo-kyum and Choo Mi-ae, chairwoman of the ruling Democratic Party, are asking for higher taxes on companies and the wealthy. Kim and Choo took that stance at economic policy meetings held on Thursday and Friday at the Blue House.

The Ministry of Strategy and Finance, which is in charge of the country’s budget and tax policies, did not support that call.

“The Finance Ministry’s plan to come up with a budget to be spent [on Moon’s five-year economic plan] seems to be very doubtful,” said Kim at one of the meetings. “President Moon Jae-in said he will adjust tax brackets during his campaign and even said he will review the current corporate tax rate to have it help country’s economy improve. I think the new taxation plan [submitted by the finance ministry] seems to be too weak and I think the government should tell the people honestly that it needs to collect more income tax to provide more welfare.”

The Blue House said it will consider her plan after discussing it thoroughly with government branches and other political parties.

The opposition Liberty Korea Party criticized Choo’s plan, saying a higher corporate tax rate will have a negative impact on the domestic economy.

Finance Minister Kim Dong-yeon has maintained his position of not raising corporate or income taxes. But it appears the issue is being led by others in the government.

This is not the first time that the Blue House and the state affairs advisory committee, the de facto transition team for the Moon Jae-in administration, had conflicts with the Finance Ministry.

Last month, the Finance Ministry confirmed that the government doesn’t plan to raise tax rates on diesel products. About 10 days after the announcement, the advisory committee said it will work on adjusting current taxes on diesel, and consider raising the rates to reduce consumption.

“When ministers and politicians all say something different on what the government should do about important policies like taxes, the people will be confused and won’t trust what the government does,” said Kim Tae-yoon, a public administration professor at Hanyang University. “Collecting more taxes has a big impact on the country and government officials should discuss thoroughly and announce agreed-upon plans through the Finance Ministry.”

Bahk Jae-wan, a professor at the Graduate School of Governance of Sungkyunkwan University and a former Finance Minister, also suggested that the Finance Ministry should take the leading role.

“We have a deputy prime minister for economic affairs - who is also the finance minister - because the economy is very important. He or she should take the major role in deciding the government’s policies on economics,” said Bahk.

Moon met with some 220 senior officials and lawmakers from Thursday through Friday to discuss how to push ahead with his five-year economic plan.