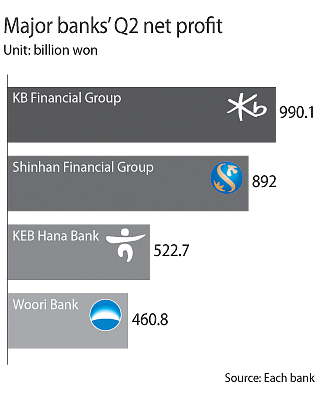 “KB Financial Group got as much as 37 percent of its net profit from non-banking businesses as it incorporated KB Insurance as a consolidated subsidiary and upped its stake in other affiliates whose quarterly earnings were fully factored in,” the researcher noted.

Shinhan was pushed back into second place in terms of net profit.

The group registered 892 billion won in net profit, up 30.5 percent from a year ago. Shinhan Financial Group’s quarterly performance was better than expected.

Kim Jae-woo, an analyst at Samsung Securities, cited growth in interest?related income and gains from the offloading of a stake in Visa as the major factors for the second quarter profit.

He expects that Shinhan’s efforts to streamline its organization, if done efficiently, will translate into good results in the future.

“Shinhan Financial Group has moved proactively to revamp its organization and facilitate seamless collaboration among affiliates, integrating departments and bringing back the talent that spearheaded previous mergers and acquisitions,” he said.

When considering half-year results, Shinhan remains on top of the pack with 1.9 trillion won in net profit, the highest since the holding group was established in 2001.

Shares in all four of the largest financial units hit new 52-week highs on Friday.