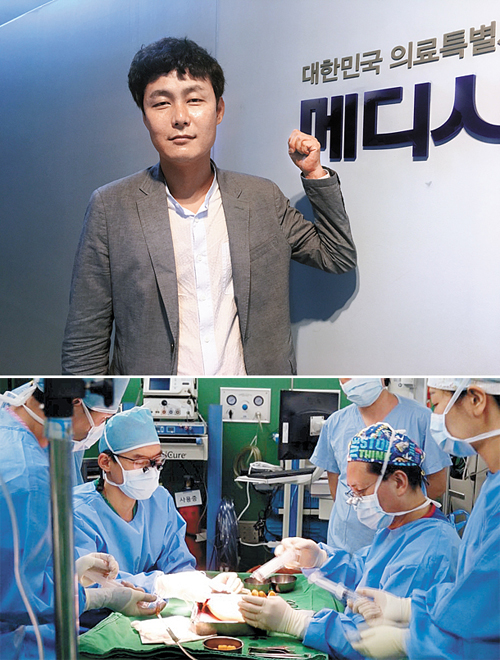 Son Jin-wook received Korea’s first arm implant surgery in February at Yeungnam University Medical Center. The 36-year-old who successfully got his arm implanted will pitch for the opening ceremony of a baseball game that takes place this Friday at Samsung Lions Park in Daegu. [BAEK KYUNG-SEO]

Son Jin-wook never thought he would pitch in a baseball game ever again. He lost his left arm two years ago while working at a factory and received a transplant early this year.

But to everyone’s surprise, the 36-year-old pitched at the opening ceremony of the LG Twins vs. Samsung Lions match on Friday, July 21 at Samsung Lions Park in Daegu.

“I feel like crying just thinking that I can throw a baseball again,” Son said in an interview after he heard the news. “I hope people will feel encouraged and inspired, looking at me throwing a baseball.”

Son has been an ardent fan of baseball all his life. He even joined the company baseball team. But in the summer of 2015, he got into an accident while working at the factory and lost his left arm.

Devastated that he could not play baseball again, Son says he even avoided going near a baseball stadium. After the accident, Son quit his job to focus on his treatment.

“I was on the waiting list for a transplant while receiving treatment at the W Hospital in Daegu but didn’t really think I could really receive one,” Son said.

But Son got the surgery thanks to Woo Sang-hyun, CEO and President of W Hospital at the Yeungnam University Medical Center. It was Korea’s first and Asia’s second such operation.

The operation lasted for nearly 10 hours with the help of about 30 professional staff members from both the hospital and medical center.

“When I opened my eyes after the surgery, I burst into tears at the sight of my family and the doctor,” Son said, adding that he felt like he has been granted a new life.

Son has been receiving outpatient treatment since May and is able to drive and do laundry with his new arm.

With the help of Daegu city, Son got a job at the Daegu Medical Tourism Promotion Institute, where he works to promote Daegu as a site for top-notch medical services in Korea.

But his story is not without some obstacles.

Under the current system, only organs such the kidney, pancreas, heart, lungs, marrow, eyes and liver are eligible for transplants. But Woo, head at W Hospital, promptly decided to give Son an arm transplant when a 40-year-old male, the eventual donor, died in February. Had the surgery gone wrong, however, serious penalties could have resulted.

Because arm transplants are not yet legal, Son cannot apply for insurance. According to Son, it costs about one million won ($887.9) per month for medicine and checkup fees.

Son is supported by the city and the hospital for now, but this are not guaranteed for life.

He added, “It’s not only about me, but all those who might receive arm and leg transplants in the future. Such insurance is necessary.”

The Korean Ministry of Health and Welfare is reviewing Son’s case and considering new laws related to implant surgery.

“I am promoting myself because the government needs to be aware of this issue,” Son said. “I hope the related law gets renewed soon so that people who receive arm or leg transplants in the future receive insurance.”