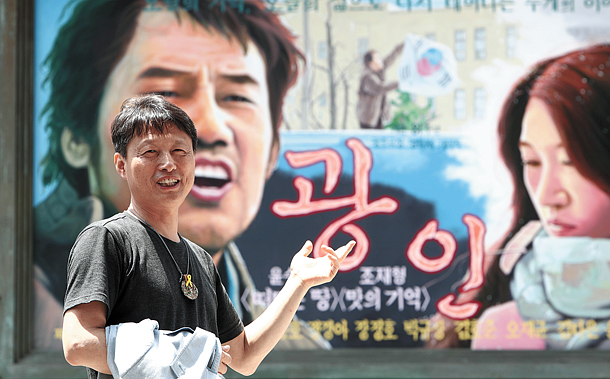 Park Tae-gyu, the artist who paints the movie posters for the Gwangju Theater, stands in front of his work at the theater. [OH JONG-CHAN]

On a typical night in the 1940s at the entrance to Gwangju Theater, one was likely to find men in suits and fedoras and women in flare skirts with perms standing out against a crowd of people in more traditional hanbok along a row of hand-painted film posters.

Today, all that has changed - except the posters.

“I was attracted to the job because it opened up opportunities to show my work to a bigger audience,” he said. “I started in 1992, just after graduating with a degree in arts from Honam University. It all began by cleaning the painters’ brushes and installing the heavy posters on the walls.”

Soon Park was working alongside his seniors and they produced 70 to 80 movie posters a year.

“But it became an inevitable fact that hand-painted posters would go out of business,” Park said. “Printed posters, much faster and cheaper, were soon hung up at theaters.”

He last worked as a full-time painter for the theater in 2005.

“I paint one to two posters a year now,” he said. The theater hangs his hand-painted posters even though the advertised movies have stopped playing.

Park said he is preparing to run a program for ordinary citizens to learn how to paint movie posters.

“It will be a class held inside the Gwangju Theater, where some 10 people will learn how to paint movie posters,” he said. “There will soon come a time when hand-painted posters no longer exist in Korea, but I hope to share the skills and joy of creating a poster full of individual artists’ characteristics and styles that is truly singular and unique.”