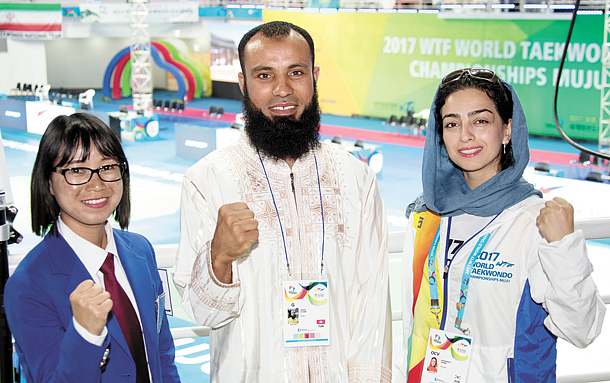 Last month’s World Taekwondo (WT) Muju Championships in North Jeolla were attended by officials and facilitators but also volunteers from all over the world.

Abdollakhani, a member of the Iranian national ice climbing team, served as a translator for the country’s taekwondo team at the competition in Muju from June 24 to 30.

Myar, an official of Myanmar’s sports ministry, served as a referee during the games. Ayouni, the director of the Federation Tunisienne de Taekwondo, led the national team from Tunisia.

Apart from the fact that they were volunteering at the championship, the three also are, or once were, on the Dream Together Master program run together by Seoul National University (SNU), the Ministry of Culture, Sports and Tourism and the Korea Sports Promotion Foundation.

Those enrolled in the program study the following for 17 months: sports administration, economics, medicine, science, law and media relations. They eventually graduate with a master’s degree in global sports management from SNU.

Abdollakhani said that Koreans, just like taekwondo players, are hard-working and passionate, and that she has not faced any discrimination as a foreigner. She said she is happy here as she can focus on her studies.

Myar, also enrolled in the SNU program, said that she is thinking more about the role of international sports events in promoting women’s rights and human rights in general.

Ayouni, after graduating from the Dream Together Master program two years ago, returned to Tunisia as an administrator for taekwondo events. He was one of the facilitators who convinced the WT to host the 2018 World Taekwondo Junior Championships and the 2020 World Taekwondo Grand-Prix Series in Tunisia.