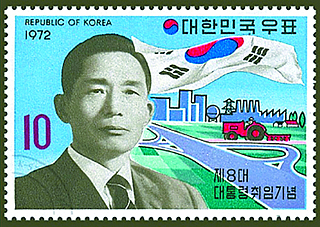 A foundation dedicated to former President Park Chung Hee sued Korea Post for canceling plans to release a stamp to celebrate the centennial of Park’s birth.

The plaintiff in the case is the Park Chung Hee Birthplace Preservation Foundation.

“[Korea Post] decided to cancel the production of the stamp without a valid reason,” the petition states. “It has violated the principle of trust.”

The Gumi city government and the foundation said that they will be holding rallies to oppose Korea Post’s decision.

In June 2016, Korea Post decided to produce the stamp in September 2017 after a request from the Gumi city government.

A number of civic organizations opposed the plan, saying Korea Post should not produce stamps that could be controversial, according to the government’s rules on stamp production.

So the stamp production committee, consisting of 12 members, voted on the plan last July 12. Eight voted against the plan.

Some Gumi-based organizations have opposed the stamp plan as well.

“The Gumi city government requested Korea Post to produce the stamps without seeking a consensus from the people,” said an association of civic groups in Gumi, including the Gumi YMCA and Gumi branch of the Korean Confederation of Trade Unions. “The centennial anniversary stamp project must be halted at once.

“Many of the projects to commemorate the 100th anniversary of Park’s birth have been criticized by the public as a type of idolization of a former leader who was a dictator.”

“People can have different opinions about Park. But he was the president who bore the brunt of one of the most difficult times in Korea’s history, and he steered the country toward achievements globally acknowledged, like his import and export strategies, introduction of foreign capital and growth of heavy industries,” the city government said. Mayor Nam staged a one-person rally in front of Korea Post’s Sejong branch on July 12.

“The committee members at Korea Post had agreed to the plan last year, but all of a sudden they changed their decision after an administration change,” said the memorial foundation’s President Jeon. “They’re being sycophants for the new administration.”

The former administration was run by Park Geun-hye, daughter of Park Chung Hee. President Moon Jae-in was elected president in a snap election in May after President Park was impeached in a corruption scandal.