A glimpse into M.C. Escher’s mind

A glimpse into M.C. Escher’s mind 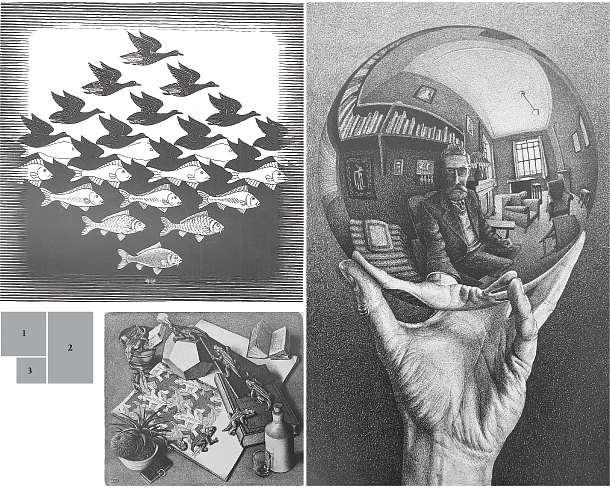 You may not have heard of the name Escher, but surely you have seen the hyper-realistic picture of two hands drawing each other, of lizards crawling out of a piece of a paper, or a patterned picture of fish and birds fitting exactly into each other. For the first time in Korea, the Sejong Museum of Art in central Seoul will hold a special exhibition of M.C. Escher until Oct. 15, featuring some 130 pieces of Escher’s most famous works.

Born the youngest child of a civil engineer in the Netherlands in 1898, Maurits Cornelis Escher (1898-1972) studied architecture at Haarlem College in 1919, soon after discovering his interest in graphic arts. He began his artistic career in 1922 depicting landscapes of Italian coastal cities that he interpreted in unrealistic perspectives, mostly on woodcuts or in black-and-white drawings.

Even in his early works which are on display in Hall 1, visitors can sense Escher’s interest in the geometrical features that make up the Mediterranean landscape.

Escher’s most famous works were, however, inspired by his visit to the Alhambra Palace in Granada, Spain where he encountered the colorful Arabesque patterns of the palace walls.

From 1936, his second visit to the Alhambra Palace, his works took on a pivotal change, beginning to focus on two-dimensional qualities rather than basing his ideas on real-life landscapes. As seen in “Sky and Water 1” (1938), Escher brought about the perfect spatial division using subjects that keep their own shape, while simultaneously dissolving into each other to complete the tessellations and fractals. 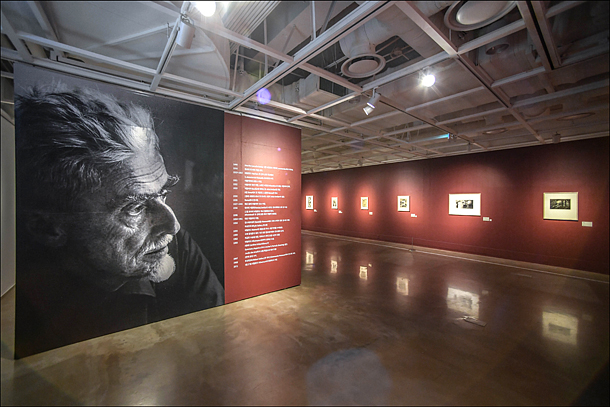 The M.C. Escher special exhibition, open July 17, will run through Oct. 15 at the Sejong Museum of Art in central Seoul. This is the artist’s first exhibition in Korea. [SEJONG MUSEUM OF ART]

Another method the artist used to confuse his audiences was his peculiar conversion of the three-dimensional world into a two-dimensional field. His command of light and dark, his depiction of the near and far and the meticulous attention paid to every detail all contribute to forming the most realistic portrayal of the impossible - water falling from below, ants crawling in an impossible loop, stairs going upward that take people down.

Rather than totally dismantling the real world, as was the case for most modernist and postmodernist works of the 20th century, Escher chose to use reality to twist the people’s normal perceptions and ideas.

By providing a scene that seems quite probable at first sight, Escher creates a discord between one’s visual senses and the intellect that processes the given information. Within the hyper-realistic universe, people are forced to join in the artist’s beautiful thought experiment between the real and the surreal.

“The things I want to express are so beautiful and pure,” Escher was quoted as saying during his life. Despite the prestige and admiration the name Escher conveys these days, his works were somewhat shunned by the artists of his time - they were too realistic for surrealists and too unrealistic for realists. Escher’s works are now praised by people from all corners of the world.

To provide visitors with a real-life experience of Escher’s graphic arts, the museum created a mirror room with a tessellation carpet that makes the patterns expand into a never-ending horizon. Videos are played in the parts of the exhibition to give a more detailed explanation and simulation of the artist’s mathematical world. The exhibition will run daily until it closes in the fall.