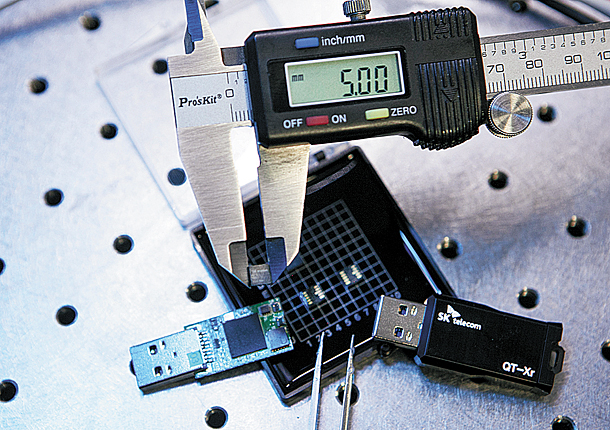 SK Telecom’s ultra-small quantum random number generating chip, five millimeters in both width and length, along with a USB version of the same chip displayed at the company’s Quantum Tech Lab in Bundang, Gyeonggi on Friday. [SK TELECOM]

BUNDANG, Gyeonggi - SK Telecom on Friday unveiled a prototype of its quantum random number generating chip, the smallest yet in the world, that can protect data from being hacked.

The chip is part of the mobile carrier’s quantum cryptography system developed to enhance security of data transmitted through various communication channels.

According to SK Telecom, the chip is only five millimeters in both width and length, which makes it small enough to be used in small devices like smartphones, laptops and drones. It may also be used in driverless cars.

While companies and governments try harder to keep communications systems safer, existing quantum-based random number generators have been too big in size and expensive to be widely used. According to SK Telecom, the smallest random number generator to date has been the size of a credit card. Others were as large as a server.

“We designed it to be a small non-memory chip so it can be used in a various range of commercial devices,” a spokesperson from the mobile carrier said. “It is also cheaper than its predecessors as we applied semiconductor processing technology to create these chips.”

According Kwak Seung-hwan, head of the SK Telecom’s Quantum Tech Lab in Bundang, while current generators cost a couple hundred dollars to thousands of dollars, its new product will cost only a few dollars.

“True random numbers are at the core of all cryptography systems,” Kwak said. “Think about future developments like internet-connected driverless cars. Without data security those cars may become the most efficient tools for murder-for-hire.”

To use Internet-connected devices, each device must connect with base stations. If the communication is not encrypted via random number generators, it becomes vulnerable to hacking, according to SK.

While the chip must be installed inside devices to be effective, the telecom company also developed a USB-type device that can offer the same security level for smartphones or laptops already released in the market without inclusion of the quantum-based chip.

Commercialization of the ultra-small quantum random number generator is expected to be completed by the end of 2017, SK Telecom said.

SK Telecom has been collaborating with 12 small and mid-sized enterprises as well as two local research institutes including the Electronics and Telecommunications Research Institute under an association established by the Ministry of Science, ICT and Future Planning for quantum communications technology research since 2013.

While SK Telecom is an early mover among local competitors, KT and Samsung Electronics have also recently announced similar developments. KT will be collaborating with Korea Institute of Science and Technology Information to accelerate research and development while Samsung will be focusing more on developing quantum computing technology.