After month of wrangling, extra budget is passed

After month of wrangling, extra budget is passed 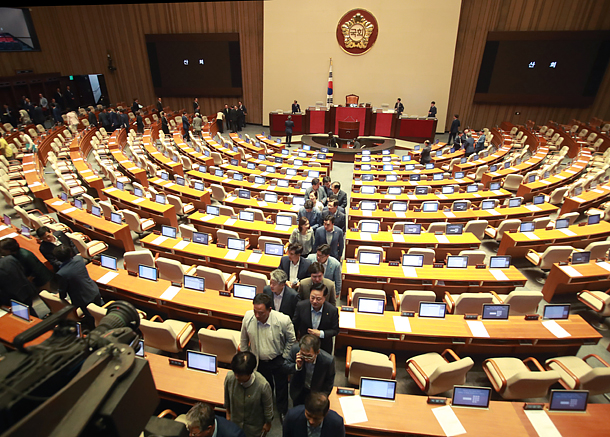 Lawmakers file out of the National Assembly on Saturday after passing a supplementary budget bill after more than a month of wrangling. [YONHAP]

After more than a month of wrangling, the National Assembly on Saturday passed a supplementary budget bill worth 11.03 trillion won ($9.86 billion) primarily aimed at creating jobs.

The parliament barely managed to pass the bill 45 days after it was submitted to the Assembly due to a shortage of ruling party lawmakers at the Saturday voting session. 26 of the Democratic Party’s 120 lawmakers were absent, including former floor leader Woo Sang-ho.

Of 179 lawmakers who cast votes, 140 were in favor of the passage while 31 opposed it. Eight abstained.

The budget bill was held hostage by an opposition that disagreed with several of President Moon Jae-in’s cabinet selections. The largest opposition party, the Liberty Korea Party (LKP), to the end remained staunchly opposed to the revised plan.

The budget that passed was watered down from the original version submitted by the Moon Jae-in Blue House. It initially requested an extra budget worth 11.18 trillion won, about 153.6 billion won more than the final bill approved Saturday.

The central issue was the government’s initial earmarking of 8 billion won to create 4,500 new central government jobs, a plan that was sharply contested by the opposition parties. The DP agreed with the People’s and Bareun parties to reduce the number of new jobs to 2,575. Instead of using 8 billion won from the supplementary budget, the three parties agree to use funds from a contingent budget approved late last year as part of the regular annual budget.

Aside from job creation, the government will use the extra budget to help regions recover from a drought earlier this year and for preparations for the upcoming Pyeongchang Winter Olympic Games. 9 billion won will be spent on installing air purifiers in elementary schools across the nation.

Saturday’s plenary session almost ended without a vote because of the no-shows by 26 DP lawmakers, enraging many within and outside the party.

It took more than two hours for the Assembly to start voting on the bill after the session began at 9:45 a.m. Saturday. In protest of the agreement reached by the DP and two opposition parties, the LKP leadership had all of its lawmakers walk out in a boycott.

That reduced the number of lawmakers on the floor to 146, four short of a quorum in the 299-member assembly. It was only after the LKP, which has 107 lawmakers, decided to return to the floor that the quorum was met, leading to a vote on the bill around 12 p.m. Saturday.
Had the LKP decided to continue its boycott, the Saturday session would have ended without a vote.

Lamenting the no-shows, especially from the ruling DP, Assembly Speaker Chung Sye-kyun remarked that assembly members should “reflect on themselves” in embarrassment.

“Both ruling and opposition parties failed today,” said the speaker.