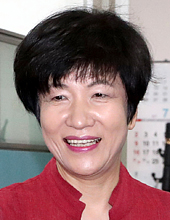 “Kim started her career as a former labor unionist and she is now a three-term lawmaker,” said Park Soo-hyun, presidential spokesman. “She has an in-depth understanding of various labor issues and labor policy. Her strong ability to mediate conflicts based on her friendly character and her political capabilities make her the best candidate to resolve society’s pending issues.”

Park said she is the best candidate to create jobs and reduce work-hours and the non-regular workforces, which refers to contract and part-time workers.

With the nomination, Moon filled 17 minister posts in his cabinet. He still needs to appoint a minister for a new ministry in charge of small and medium enterprises after a revised government organization law is endorsed by the cabinet next week and formally takes effect. That change will also upgrade the head of the ministry of patriots and veterans affairs to a minister from a vice ministerial post.

An official of the Blue House did not deny criticisms that choosing a lawmaker is a way to get nominees approved more easily. Moon originally named Cho Dae-yop as labor minister, but he gave up the nomination earlier this month after a series of ethical laps was revealed during a confirmation hearing.

“It was proven that a lawmaker has a higher chance of passing a confirmation hearing,” the source said. The Blue House had said there would be no more lawmakers joining the cabinet.

The source also said Kim’s nomination will allow Moon to fulfill a pledge to fill 30 percent of top government posts with women. Including Kim, six of the 19 key ministerial posts are now taken by women.

Kim used to be a professional basketball player for the Korea Trust Bank. After her athletic career, she worked for the bank and joined its labor union’s leadership in 1985. In 1995, she became the first woman to serve as the deputy head of an umbrella union, the Korean Financial Industry Union.

She started her political career in 1999 after being recruited by the late President Kim Dae-jung. She started her first lawmaker term as a proportional representative in 2004. She lost her next election in 2008, but won victories in 2012 and 2016. During the 19th National Assembly, she served as chairwoman of the environment and labor committee of the National Assembly and worked on issues concerning victims of a toxic disinfectant for humidifiers.