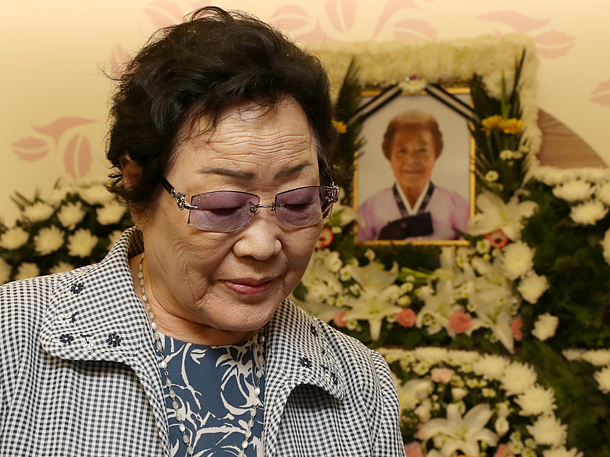 Lee Yong-su, a survivor of the Japanese military’s wartime sexual slavery, pays respect at the wake of fellow victim Kim Kun-ja, who died at 8:03 a.m. on Sunday morning. Kim died of natural causes at the age of 91 at the House of Sharing, a shelter for so-called comfort women victims in Gyeonggi, where she has been living since 1998. Her wake was held at Cha Bundang Medical Center in Seongnam, Gyeonggi, and was expected to be attended by the foreign minister. Born in 1926 in Pyeongchang, Gangwon, Kim was mobilized by Japanese forces to frontline brothels in northeastern China at the age of 17. She attempted to commit suicide seven times during her three years there before she was released in 1945 after Korea’s liberation. She testified about her experiences in a hearing hosted by then-U.S. Rep. Mike Honda in February 2007, drawing international attention to the sexual slavery issue. Her funeral service will take place on Tuesday. Lee’s death reduces the number of living victims of Japan’s forced servitude to 37. [YONHAP]