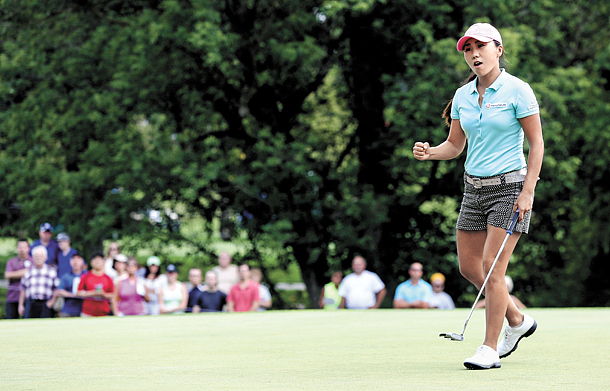 Kim In-kyung fist pumps after making a putt during the final round of the Marathon Classic at Highland Meadows Golf Club in Sylvania, Ohio on Sunday. [AP/YONHAP]

Kim In-kyung rallied on Sunday to capture her second victory of the season at the Marathon Classic at Highland Meadows Golf Club in Sylvania, Ohio.

Kim started the final round two shots behind the leader, Nelly Korda of the United States, but quickly took the lead by starting the final round with a birdie. Kim then made back-to-back birdies on the third and fourth holes to tie the lead at 16 under par. Korda made a bogey on the fifth and Kim took the lead for the first time by two shots.

“I think today the pin positions were a little comfortable for me,” Kim was quoted as saying on the LPGA website. “I’ve been hitting a few draws this week, and when the pin is tucked on the left side, I had a hard time, but I think just knowing what I’m doing kind of helped me to plan out the round.”

Throughout Kim’s front nine, she made six birdies, including her 30 foot putt on the par three eighth, giving her a four-shot lead over Lexi Thompson of the United States. In the back nine, Kim continued her momentum, consistently making pars and back-to-back birdies on the 15th and 16th holes for a bogey-free eight under. 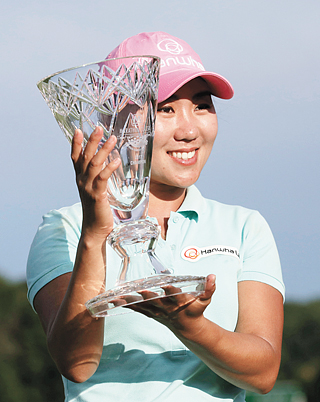 Kim holds the trophy after winning the Marathon Classic. [AP/YONHAP]

Meanwhile, Thompson was among the golfers fighting for the lead, but from her missed putt for par on the 12th, she failed to overcome Kim’s four-shot lead. This marks Thompson’s fifth runner-up finish of the season.

“Really good names are on top of the leaderboard and I just wanted to go out and make the most out of it,” Kim was quoted as saying on LPGA website. “And today I was able to do that.”

This is the first time for Kim to win more than one tournament in a single season since her LPGA debut in 2007. Kim was once a top player on the LPGA tour, where she managed to earn more than $1 million in 2009 and 2010. After Kim’s victory at the Lorena Ochoa Invitational in 2010, she failed to win tournaments for six seasons. But with a victory at the Reignwood LPGA Classic, Kim is back on top on her game.

Though Kim won two tournaments, she is having quite a roller-coaster season, with only two top-ten finishes and missing four cuts out of a total of 11 tournaments. Even before her victory on Sunday, Kim missed two cuts.

“It’s golf,” Kim was quoted as saying on the LPGA website. “I really didn’t expect anything. Maybe that’s why I played really well.”

This marks Kim’s sixth LPGA tour victory and makes her the second multi-winner of the season after Ryu So-yeon. In addition, Koreans continue their dominance on the LPGA tour, winning ten out of 20 tournaments played so far this season and 11 times out of the 19 times this tournament has ever been played.

Park Sung-hyun, the U.S. Women’s Open champion, failed to win back-to-back tournaments after taking the U.S. Open, which would have been the first time since Pak Se-ri did it in 1998, finishing tied for sixth. Unlike last week at the U.S. Women’s Open, the American golfers dominated the leaderboard, where Park and Kim were the only Koreans in the top ten.

Next the LPGA tour will head to Europe for two weeks to play in the Aberdeen Asset Management Ladies Scottish Open and Richo Women’s British Open.