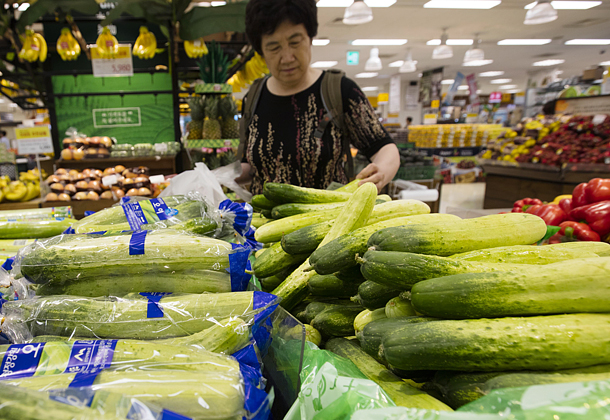 A shopper browses cucumbers at a supermarket in Seoul on Monday. Cucumber and watermelon prices have risen in the past few days after their main producing regions were affected by heavy rain. [YONHAP]

Cucumber and watermelon prices have soared in the past week after greenhouses in major cultivating regions were hit by unusually heavy summer rain. Agricultural experts predict the effects from weather will continue through next month and possibly into September.

The average price on Monday of a bundle of 10 dadagi cucumbers, a variation that grows in the country’s central region, was 10,720 won ($9.60), more than double the price on June 24 and nearly 80 percent higher than the five-year average, according to data from the Korea Agro-Fisheries and Food Trade Corporation, a state-owned company.

The case was similar with chuichung cucumbers grown in Korea’s south. The average consumer price on Monday was 12,259 won, more than twice the price last month and almost 70 percent higher than the five-year average.

Dadagi and chuichung are the two most widely eaten cucumber variations in Korea. Both saw prices suddenly jump to the current level last Thursday. Dadagi had risen from around 9,200 won and chuichung from 10,400 won.

The price increase was smaller for watermelons. The average unit price on Monday was 18,276 won, around 15.5 percent higher than the five-year average. Watermelon prices had been steadily going for around 17,500 won since late June but suddenly jumped to the current level on Monday.

A report from the Korea Rural Economic Institute, a government think tank, last week attributed the price increase to heavy rain that occurred during the first two weeks of July across North Jeolla in the south and North Chungcheong in the central region. The rains flooded greenhouses that were growing crops set for release in the market this month. Major sites affected include Cheonan and Jincheon in North Chungcheong and Iksan in North Jeolla.

In Cheonan, the accumulated precipitation during the 10-day rainy period was 622.3 millimeters (24.5 inches), more than twice the amount last year. This flooded 15 percent of the land that was growing cucumbers set to go on sale in July.

In Iksan, where watermelons are being grown, there was less rain, with accumulated precipitation of 311.5 millimeters, but this caused flooding in 70 percent of land cultivating watermelons set for release in mid-July.

The report added that the supply of cucumbers and watermelons during the remainder of July would decrease compared to the previous year, and the effect might continue for the next month or two. “The rain affected some greenhouses that were growing young cucumbers to be released in the market through August and September,” the report said.

“If farmers immediately clear the greenhouses and replant new cucumbers, new products could start entering the market around mid-August,” said Kim Hyung-jin, a researcher at the Korea Rural Economic Institute. “But if some of them decided to change and plant crops other than cucumbers in the facility, the effect could last longer.”

For watermelons, the price increase is expected to be smaller thanks to supply from Gangwon and North Gyeongsang, which were less affected by the rain.