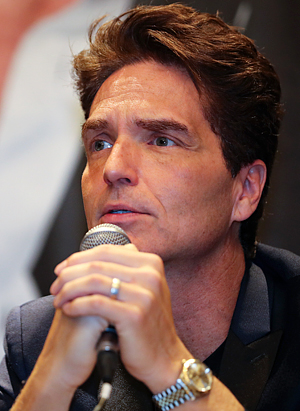 American pop singer Richard Marx opened up about delaying his June concert during a press conference held at the Conrad Seoul in western Seoul, on Monday.

Marx is scheduled to hold three concerts in Korea in October; at the Namdong Gymansium in Incheon on October 12, followed by Korea University’s Hwajeong Gymnasium on October 14 and BEXCO in Busan on October 15. He is also slated to appear on the KBS singing program “Immortal Song 2: Singing the Legend.”

When quizzed on why he delayed his June concert in Korea, he said, “Korea was in a very tense situation and people stopped me from coming here at a time of tensions. I thought delaying the concert, rather than cancelling it was in the best interests for both parties.”

Regarding the December 20 incident where the singer restrained a violent Korean passenger during a Korean Air flight, he said, “I didn’t do it by myself, I only helped.”