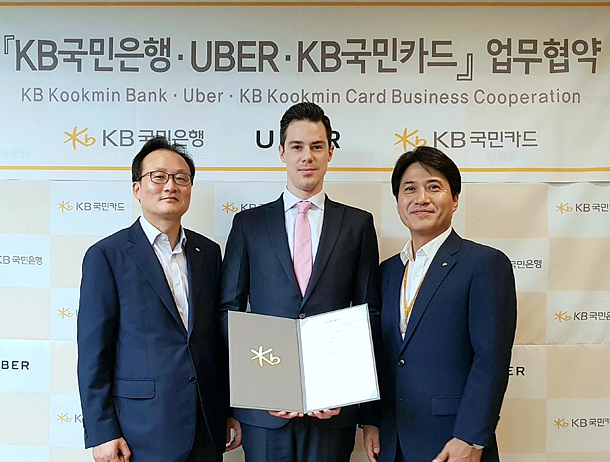 While the partnership signed last week may open the door for KB Financial Group to become Uber’s main Korean financial partner in the future, KB is set to help Uber when it launches its food delivery service, known as UberEats.

“Since we are a financial group, there are a number of different types of support we can provide Uber,” said a spokesperson from KB Kookmin Bank, who explained that possible services include loans to local partner restaurants of UberEats through KB Capital, a consumer finance service providing arm of KB group.

The spokesperson added that no further details on providing Uber with financial infrastructure have been finalized, as the company continues its attempt to launch its key services in the local market.

Uber, deemed one of the most valuable tech startups in the world at nearly $70 billion in value, had a rocky entry into the local market in 2013.

Its ride-hailing application was declared illegal in 2015 after it faced strong opposition from the local taxi industry. The company was slapped with a 10 million won ($8,979) fine earlier this year. The company is currently operating UberBlack, a luxury taxi service.

To mark the partnership, KB Bank and Uber will launch a promotional event for customers travelling to designated countries in Southeast Asia ? Hongkong, Singapore, Taiwan, Thailand and Vietnam.

For those who exchange their money for travel to these countries, KB Kookmin and Uber will provide discount coupons they can use with the local Uber services, the company said. The minimum amount of exchange required to receive the coupon is 500,000 won.