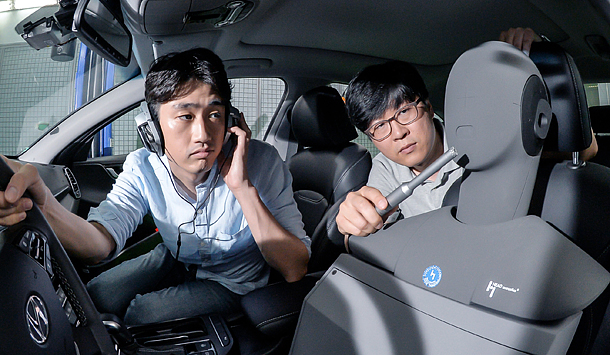 The partners announced on Monday they had created a voice recognition system that links automobiles with online servers to analyze voice commands and search for information.

The system uses an artificial intelligence platform of Kakao - Kakao I - as a voice recognition agent. This is the first time that Kakao opened the Kakao I platform to an outside company, a statement by Hyundai said.

A driver can activate the system by pressing a button on the steering wheel of his or her car. Upon activation, the driver can give voice commands to the system, which transfers the voice data, as well as the location of the vehicle, to Kakao’s speech recognition server. Once fully analyzed, the data is transmitted to Kakao’s navigation server where Kakao I - considered the brain of the system - analyzes the data accumulated by Kakao. The navigational info is ultimately sent to the vehicle.

“[This is more sophisticated than voice-recognition navigation systems out there now because] by using AI servers operated by Kakao, it minimizes errors in analyzing voice commands of the users,” explained a spokesperson from Hyundai. “Furthermore, as it automatically searches for info online, rather than solely based on a database of a built-in navigation system [which needs constant updates], it can provide drivers more up-to-date information.”

This is the first time that a domestic carmaker has coupled its on-deck infotainment system with server-based voice recognition system instead of a smartphone-based connection system. The company launched a research lab in 2014 dedicated to developing intelligence systems for automobiles.

“Voice recognition technology for automobiles will have infinite applicability by being integrated in connected cars in the future,” said the company spokesperson. “Hyundai and Kia’s goal is to develop related technologies to the point that drivers can enjoy different content while focusing on driving.”

The companies’ goal is AI assistance for automobiles capable of conversing with drivers.

The new G70 from Hyundai’s luxury brand Genesis, slated to be released in September, will be equipped with the new system. Hyundai and Kia will provide the system free-of-charge to drivers using its telematics service BlueLink.