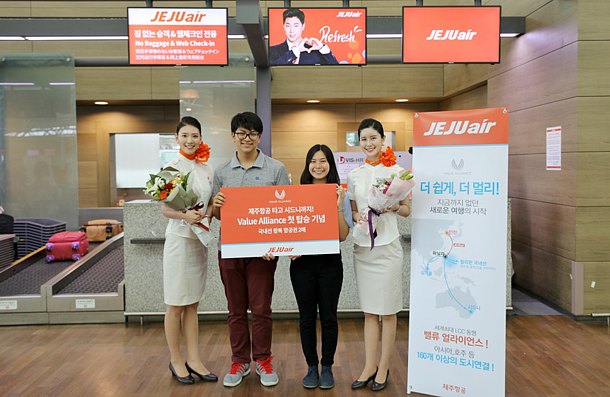 Kim Kwang-min, second from left, and Kim Yoon-joo, third from left, with Jeju Air flight attendants before boarding their plane bound for Manila, the Philippines, on Friday. The Kims were the first customers to purchase the ticket. [JEJU AIR]

Jeju Air and Cebu Pacific are both part of the Value Alliance consisting of eight major low-cost carriers in the Asia-Pacific region. While the alliance was set up last year, it is Jeju Air’s first joint service with a member carrier.

The first interline tickets went on sale in June, and the first passengers left from Incheon International Airport on Friday night bound for Sydney, Australia, via Manila in the Philippines. Interline tickets refer to a set of tickets that connects flight routes through partner carriers.

Jeju Air operates two routes between Incheon and the Philippines, to Manila and Cebu. From there, passengers can connect to 37 domestic flights and 29 international flights offered by Cebu Pacific, the company said. Currently, Cebu Pacific has international service to Sydney, Jakarta in Indonesia and Riyadh in Saudi Arabia. 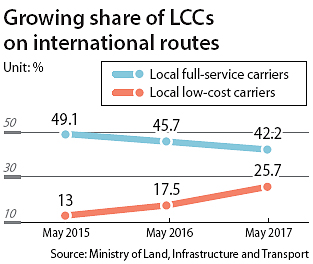 Other members of the LCC alliance include Thailand’s Nok Air, Singapore’s Scoot and Japan’s Vanilla Air. Jeju Air plans to sign partnerships with other members of the alliance so it can offer greater international service without having to expand its fleet.

Membership in the alliance was one of Jeju Air’s main strategies to survive in the increasingly crowded and cutthroat Korean LCC market. More low-cost carriers are jumping into the business, even as the six existing ones are competing for a limited pie of travelers in the country.

This had led to rising concerns about the long-term sustainability of the airline companies, especially since they are competing on price while continuing to expand their offerings and service. According to data from the Ministry of Land, Infrastructure and Transport, as of May, local LCCs have captured 25.7 percent of the share of international flights, almost double the share they accounted for in 2015.

During the same time, the share of full-service carriers like Korean Air and Asiana Airlines shrank from 49.1 percent in May 2015 to 42.2 percent in May this year. Jeju Air remains one of the low-cost market’s most resilient airlines. In a report Thursday, Choi Go-woon, a research fellow at Korea Investment and Securities, said Jeju Air’s second-quarter revenue is expected to increase by 31.9 percent compared to last year because “it offers more short-haul flights at reasonable fares to meet growing demand for overseas travel.”

“With its international routes set to expand in the third quarter, Jeju Air should enjoy bigger effects in terms of economies of scale compared to its rivals as the country’s leading LCC,” the analyst said.