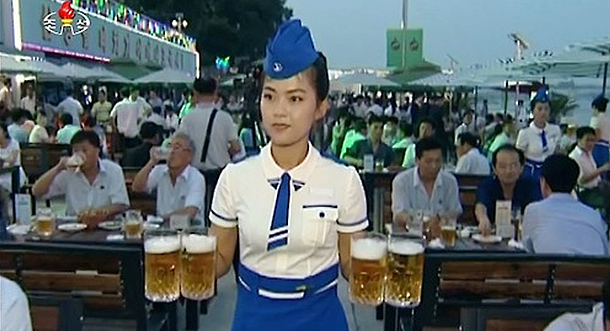 A Chinese tour agency that specializes in North Korean tours announced the cancellation of the second Taedonggang Beer Festival on Sunday, which was initially planned to take place in Pyongyang from Wednesday throughout the end of August.

“The reason for the cancellation is unclear and we don’t expect a full explanation,” Koryo Tours said in a brief statement on its official blog, “but it is possibly due to the country’s ongoing drought, which has caused a great deal of trouble.”

North Korea has yet to comment through its state media. The Korean Central News Agency (KCNA) reported as recently as last week that a newly produced wheat beer would be featured at this year’s festival.

The drought, which the Food and Agriculture Organization of the United Nations said was the country’s “worst since 2001,” has been going on since April, undermining North Korea’s production of rice, corn, potatoes and soybeans.

A South Korean government official said Washington’s recent decision to ban its citizens from traveling to North Korea might have sown fear in the regime that other foreign governments could take similar measures, leading to a drastic decline in ticket sales.

It is unknown exactly how many tourists attended last year’s festival, which North Korea advertised as an opportunity to try its beers and mingle with ordinary North Koreans, a rare opportunity in the world’s most reclusive nation.

The U.S. State Department said last Friday that American citizens would be banned from traveling to North Korea due to “mounting concerns over the serious risk of arrest and long-term detention” under Pyongyang’s system of law enforcement, adding that the restriction will be announced later this week and will take effect 30 days following the notice’s publication.

The measure came a month after the death of Otto Warmbier, the 22-year-old American college student who was released by North Korea in a vegetative state after 17 months of captivity, only for him to die six days later.

There are three known U.S. citizens currently detained in the North, all of whom are ethnic Koreans: Kim Sang-duk, an accounting teacher at Pyongyang University of Science and Technology; Kim Hak-song, a researcher from the same school; and Kim Dong-chul, a businessman.