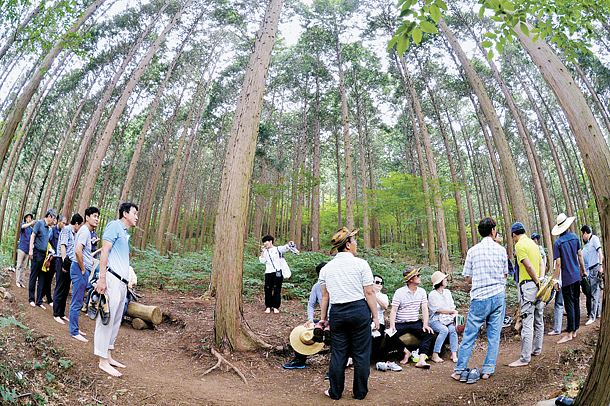 Students from the Korea Forest Academy during a field study last month at the so-called Jangseong Forest of Healing in Jangseong County, South Jeolla. [KIM SUNG-TAE]

For Kim Jong-guk, 59, a Hyundai Motor Company worker in Ulsan, life after retirement couldn’t be more hopeful. With only a year left until he leaves the workforce, Kim has already planned out -- and prepared for -- his next chapter.

Kim specifically wants to farm in the woods.

“I want to grow mushrooms, deodeok [a type of root] and bellflower roots,” says Kim, who is one of 76 students enrolled in the Korea Forest Academy’s advanced management course this year. “I’m learning some great stuff here and meeting so many people from different backgrounds.”

Founded in 2010, the Korea Forest Academy offers a variety of courses on forest farming, from teaching how to raise herbs and landscaping different trees to woodland burial. The advanced management course in which Kim is enrolled runs on a 25-week schedule of 160 hours of classes from February. Tuition is 3.8 million won ($3,380).

“Our goal is to allay their fears about the mountains and teach them the ropes of forest farming,” says Ahn Jin-chan, head of the academy.

Most of the students who sign up for the courses are candidate farmers about to reach retirement or office workers who spent decades in cubicles and who now dream of a second career in a freer environment. When a JoongAng Ilbo reporter joined a recent class held in Jangseong County, South Jeolla, a lawyer and a business CEO said they wanted to learn forest farming as a side job.

Some 40 students in the academy’s advanced management course gathered late last month at the so-called Jangseong Forest of Healing, where Lim Jong-guk, one of Korea’s most renowned forest farmers who died in 1987, spent two decades cultivating fields of cedars, larches and cypresses.

An instructor from the Jangseong Soopchewon, a group under the Korea Forest Welfare Institute which provides forestry education, taught how to distinguish trees and wild herbs, as students took note.

On another day last month, the class convened in the National Institute of Horticultural and Herbal Science in Eumseong County, North Chungcheong, where they learned how to grow dong quai and milk vetch root from a researcher. Students showered him with questions like which part of the root had medicinal effects, and the difference between a milk vetch root with a lot of fine roots and none.

“Forest farming is not as romantic as a lot of people think once you embrace it as a living,” says Cho Yon-hwan, chairman of the Korea Forest Academy’s board of directors, who formerly served as head of the Korea Forest Service. “There’s so much to learn, which I think makes it harder than fishing or farming in the fields.”