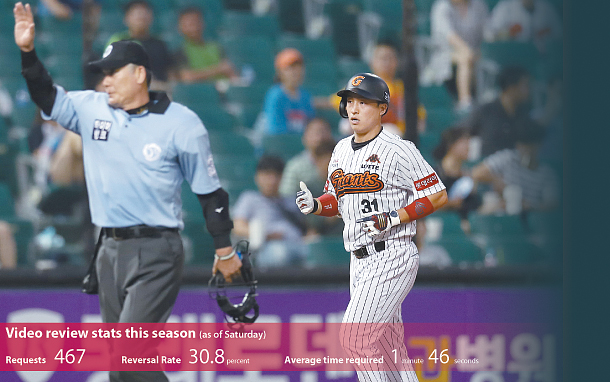 Son Ah-seop, right, rounds the bases after hitting a home run against the Samsung Lions at Ulsan Munsu Baseball Stadium on Thursday. The call was later reversed by the KBO Video Review Center and was ruled a two-base hit, but the TV replay clearly showed a home run. [YONHAP]

The Korea Baseball Organization (KBO), which is still reeling from a series of match fixing scandals, has continued to lose the trust of fans following a spate of incorrect decisions by umpires.

During the Lotte Giants game against the Samsung Lions at Ulsan Munsu Baseball Stadium on Thursday, Son Ah-seop hit what appeared to be a home run at the beginning of the third when the Giants were losing 4-1. After hitting the fence above the yellow line the ball bounced back onto the field.

The umpire awarded a home run but, following the Lion’s request for a video reviewing, the decision was reversed, making it a two-base hit.

Since the ball visibly crossed the yellow line, the baseline for a home run at Munsu Baseball Stadium, the reversal was considered as one of the worst judgment errors of the season. Due to the decision the game ended with a 4-4 tie in the 12th inning.

Despite the KBO’s two billion won ($1.8 million) investment in a Video Replay Center this year, the new set-up is failing to meet expectations. Fans have criticized the KBO, saying the video review has achieved nothing but incorrect calls.

The Giants’ incident wasn’t the first time the KBO has made a judgment error this season. During the Kia Tigers’ game against the NC Dinos on July 11, Kim Min-sik, catcher for the Tigers, tagged Na Sung-bum, the Dinos’ outfielder, before he touched home plate, but the umpire ruled that he was safe. Despite a video review, the decision was upheld. Unlike in the Giants’ game, this decision didn’t affect the outcome at all, as the Tigers still won the game 7-4.

KBSN Sports, who broadcast the game, used their own technology to review the scene and determined that it was clear that Kim’s tag was made before Na reached the home plate.

Both decisions were incorrect, but in different ways.

In Son’s case, the wrong decision came from Kim Ho-in, the director of the KBO’s Video Review Center, for not understanding the rules at different local stadiums. Kim Ho-in has since been given a ten day suspension and fined 500,000 won ($448) for making an incorrect ruling.

On the other side, in Kim Min-sik’s case, the mistake was a result of the Video Replay Center’s lack of technology. Up until last year, the KBO utilized technology from broadcasting companies for video reviews. But as the KBO decided to run their own video review system, the media televises events after the decision has been made.

Video reviewing was introduced in the KBO in July 2014 to reduce judgment errors. With high-tech cameras, there have been fewer mistakes compared to the past.

However, since the KBO’s video review system is not at the level of the technology owned by broadcasting companies, some broadcasters refuse to share their footage with the center.

“There are still a lot of areas for improvements,” admitted Chung. “We’ll try our best in increasing the accuracy of the video review by getting better equipment and strengthening our workforce.”

For the KBO to regain its trust from the fans, they must make improvements in the video review system so they can get to the level of the broadcasting companies.