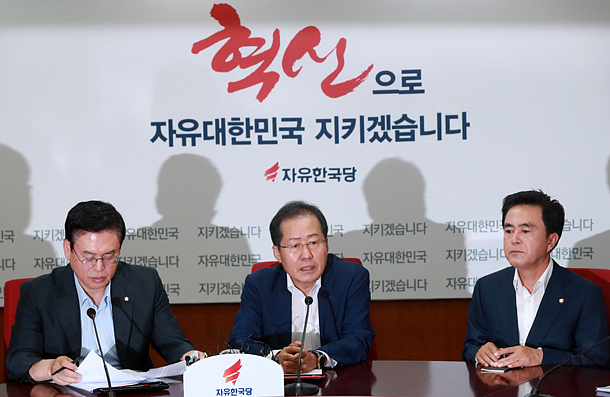 Opposition leader Hong Joon-pyo, center, makes remarks at a Supreme Council meeting of the Liberty Korea Party. Despite the main opposition’s attempt to reform itself, its approval rating lags way behind the ruling Democratic Party. [AP/YONHAP]

I am involved with a small group of people who lived through the earthquake that hit the Japanese region of Tohoku in 2011 and the tsunami that led to the nuclear disaster in Fukushima Prefecture.

Last year, I learned something new. The head of the Tohoku-based Takashimizu Brewery arranged a bus to take us back to Tokyo a day after the earthquake that cut off power, water and telecommunications lines. But he could not find drivers because the roads were too dangerous. He nevertheless found not just one but two drivers in case of an emergency. I later learned that they refused to take us. But the factory head argued hard and the bus drivers could not but accept his demand. As the saying goes, leadership shines at times of crisis.

The once highly popular Japanese Prime Minister Shinzo Abe has recently seen his approval rate sink below 30 percent. Some are starting to talk about a collapse of his administration. But I don’t believe it. A replacement is only possible when there is an alternative and Japan doesn’t have one. The main opposition Democratic Party commands an approval rating of a paltry 3.8 percent. Even if there is leadership change, it will be within the ruling Liberal Democratic Party.

The United States is in a similar predicament. From the way President Donald Trump gets things done — or doesn’t get things done, to be more precise — it’s hard to understand how Americans can stand their president. And yet we hear little from the Democratic Party. In the states where Trump won, there are more voters who say they would cast a ballot for Trump in the next election than those who say they wouldn’t. There’s a big chance Trump can be reelected. General Douglas MacArthur in 1951 declared Americans’ mental age averaged 45 versus 12 for the Japanese. I would give them both 12.

The United States and Japan lack alternatives to their imperfect leaders because the defeated parties don’t realize the reasons they lost.

Japan’s LDP held 50 soul-searching sessions — twice a week for three years — after it was defeated by the DP in August 2009. In earlier sessions, it blamed the media for having critically portrayed the party and its lawmakers. From the 30th session, it started looking inward. It ended up regaining ruling power. The DP learned no such lessons. It held a self-review session only once over the last five years.
The Democratic Party in the U.S. merely regrets it fielded Hillary Clinton and is doing little to win back public support.

The opposition in Korea is no different. The Liberty Korea Party held a conference just once after the presidential election in May. One of its members likened the Korean people to lemmings and one senior member threatened punitive action on those who joined the legislative impeachment of former president Park Geun-hye. Party head Hong Joon-pyo warned that people in Daegu and Gyeongsang Province — the hometown of Park and the conservative party — “would forgive murderers, but not betrayers.”

According to Chinese ancient war strategy, “It depends on me to not to lose, but on the enemy to win.” One must look inward to win the next time. Korea’s main opposition stubbornly refuses to learn why it was shunned by voters. It’s a pity that we have such ignorant leadership in the opposition.