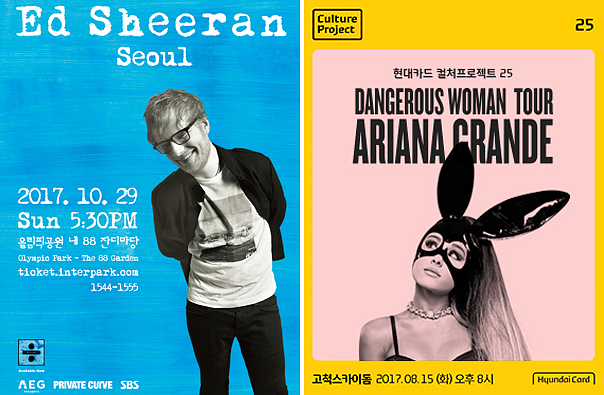 This year, many international music heavyweights such as Coldplay, Metallica and Britney Spears have made stops in Korea. And with Ed Sheeran, Gorillaz, Dua Lipa, Gallant, Ariana Grande and the Chainsmokers scheduled to perform in the upcoming months, it looks like the demand for foreign acts will continue to increase. Most people see these concerts as one-off experiences, but what effect do they have on local music sales?

According to a study conducted by Korea Creative Content Agency in 2016, 23.5 percent of concertgoers bought a physical copy or digital version of the album after the concert.

A source inside the music industry said, “What [foreign] artists enjoy from Korea is the positive response from the audience. Korean fans’ tendency to sing along to every part of their songs is what the artists are amused by.”

According to data from Genie Music, a domestic music streaming site, the average monthly streams for music by Ariana Grande, Coldplay and Ed Sheeran more than doubled after they confirmed their tour dates.

When Coldplay confirmed their Korean stop on November 15, their streams went up by 348 percent, while on April 15 and 16, the concert dates, streams increased by 1,083 percent.

Of course, not everyone saw the benefits of the streams. One insider said, “Britney Spears didn’t see her streams increase as much, since she is known for her performances mostly, not her singing abilities.”