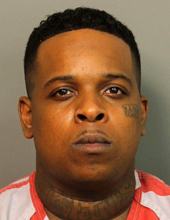 LITTLE ROCK, Ark. - A federal magistrate judge declared Monday that the rapper who was performing at a Little Rock club during a mass shooting was too dangerous to cut loose pending a trial on a separate weapons charge, rejecting arguments that gunplay captured on video and a tough-guy persona were just part of an act.

Ricky Hampton of Memphis, Tennessee, who performs under the name Finese2Tymes, was indicted this month on a charge of illegally possessing a weapon at a club in eastern Arkansas about a week before the July 1 Little Rock shooting.

Hampton had been in a Tennessee prison until last summer on a robbery conviction, and Kearney noted Monday that Hampton’s rap sheet starts at age 15. “There is heavy evidence that he is a danger to the community,” U.S. Magistrate Jerome T. Kearney declared in court.

In a written order filed later, he added, “The Court finds no condition or combination of conditions that would reasonably assure the safety of the community.”

With a pair of felony convictions behind him, Hampton is barred from having weapons. His bodyguard was accused in federal court last week of supplying Hampton with one, and Hampton was charged July 6 after a woman complained that the rapper shot at her June 25 outside a Forrest City nightclub, grazing her neck. No one has been charged in the Little Rock shooting, which left 28 injured.

Other video showed him smoking marijuana rolled into cigars. “Ricky Hampton is a violent individual. He has no regard for the law,” federal prosecutor Stephanie Mazzanti argued.

“He has said he doesn’t go to his appearances unless he is armed.” But Nicole Lybrand, a public defender representing Hampton, said that prosecutors waited more than a week after the Forrest City incident before arresting him in Birmingham, Alabama, the day after the shooting at Little Rock’s Power Ultra Lounge.