Creating community in a deserted neighborhood : One company re-imagines gosiwon as an engaging space for young people

Creating community in a deserted neighborhood : One company re-imagines gosiwon as an engaging space for young people

Following the abolishment of the country’s state bar exam, reading rooms operating near gosiwon (establishments that offer small rooms to those preparing for exams), saw a drop in customers as they began to move out of such housing facilities. [YONHAP]

According to the Ministry of Justice, the country’s state bar exam will officially be abolished on Dec. 31. In June, the second written test for the 59th and final state bar exam was held at Yonsei University, closing the door of opportunity that allowed anyone, regardless of their background, to enter the legal profession through a series of tests.

Through the bar exam that was introduced in 1963, about 20,000 people became legal professionals including lawyers, prosecutors and judges. Now the only door into the legal world is through the U.S.-style law school system, which was introduced to Korea in 2007.

Usually, bar exam takers pass the exam after several attempts and it’s not uncommon to come across those who had been taking the test for more than five years. In the meantime, they rent a small gosiwon, or establishments that offer tiny rooms to those preparing for state exams at a low cost, and stay there and study until they finally pass the exam. However, following the announcement that the country will abolish the state bar exam, many gosi-saeng, a Korean word that refers to students preparing for state exams including the bar exam and the civil service exam, packed their bags and vacated their tiny rooms.

This came as a threat to neighborhoods like Sillim-dong in Gwanak District, southern Seoul, which is known for its high density of gosiwon. According to the Gwanak District Office, the number of goshisaeng in the area dropped from 50,000 in 2010 to 20,000 in 2014. Following the sudden drop, many gosiwon and facilities in the neighborhood like laundromats, reading rooms and small restaurants that served cheap home-cooked meals began to close down.

Seeing the collapse of the historic Seoul neighborhood, five architects from “social architecture firm” Sunlab, rolled their sleeves up to try and restore and regenerate the neighborhood by coming up with alternative ways to utilize empty gosiwon and attract young Koreans back to the neighborhood.

In 2015, the architects leased three floors that used to be home to a gosiwon named Ebenezer under a five-year contract, renovated the building and turned it into a contemporary gosiwon named “Share Us.”

“At the time when we leased the building, only four of the 44 rooms were occupied,” said Hyun Seung-heon, head of Sunlab. According to Hyun, Sunlab’s mission is to restore the sense of community through each space regeneration.

“The atmosphere of a tiny-room gosiwon is quite poor, but they’re quite established as a style of one-person household in Korea,” Hyun added. “We thought really hard about how to positively transform that lifestyle and came up with the design of Share Us.”

The number of rooms was greatly reduced in the refurbished gosiwon, from 44 to 19, as Hyun’s design divides rooms into so-called “units” to foster “sense of community.”

“Single-person households continue to increase and young Koreans began to lose that sense of community and belonging. They hardly interact with others and it was pitiful to see them becoming so individualistic,” Hyun said, adding that he also used to live for many years in a tiny gosiwon. 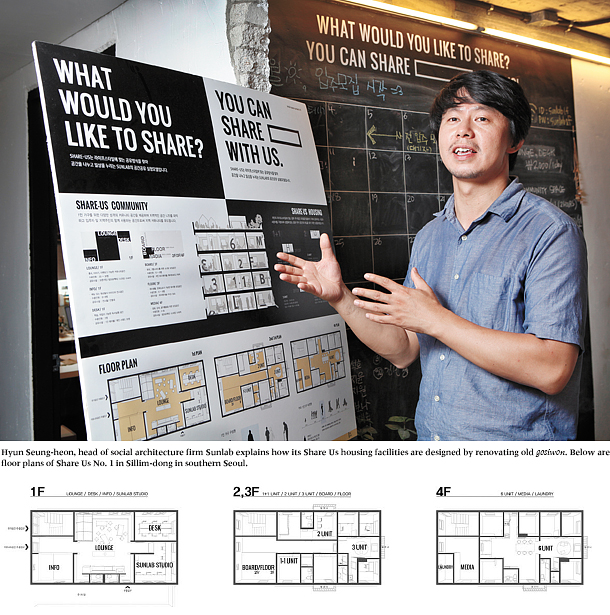 “We wanted to see what kind of people prefer what type of spaces,” said Hyun. “We noticed that the two-person unit is preferred by two people who are friends or siblings as they have to share everything together, but pay a little less. The 1+1 unit is preferred by those who want more privacy as the rooms have separate entrances. The three-person unit was the most popular.” Each room costs 350,000 won ($313.40) per month while the two-person unit costs 270,000 won per person.

“Before it was renovated, the rooms were about five square meters (53.8 square feet) each,” said Hyun. “The sizes vary by unit but in average, the rooms are only slightly bigger than the original. But they have access to larger common areas within the unit, and also a lounge on the first floor that is shared by the residents as well. It’s like a share house.”

To illustrate, those who live in a three-person unit get one 4.6-square-meter room each, but share a bathroom and a living room area that’s 13.16 square meters, plus a balcony. The lounge on the first floor of Share Us is a common area equipped with a kitchen. Tenants can come down to have drinks or eat and mingle with others living in the same building. It is also equipped with an espresso machine for coffee, as well as an emergency kit and a tool box. Next to the lounge is a study room so that tenants who want to form a study group can study together.

“The reason why we wanted to create this community space instead of using it to have more rooms is specific to Sillim-dong, where the majority of residents are young Koreans, all living individually in their tiny rooms,” said Hyun.

“We wanted to offer them more space that they can call home, while giving them a sense of community, and a platform where they can meet others in a similar situation and support each other.”

It is in fact a requirement in the contract that tenants sign to have a get-together once a month.

Left: The exterior of Share Us No. 1 located in Sillim-dong in Gwanak District, southern Seoul, known for its high concentration of gosiwon. Center: The lounge of Share Us No. 1 where tenants can come down to cook, drink or have gatherings. Sunlab also organizes monthly events by inviting tenants and neighbors so they can mingle and have a sense of community. Right: The living room area inside a five-person unit at Share Us No. 2, which is located 500 meters away from the first Share Us location. [PARK SANG-MOON, SUNLAB]

“They get to know each other and befriend each other over beers,” said Hyun. “Although it is required for all tenants to attend under the contract, only about 60 percent of them make it to the monthly meeting. But I think it really helps those who need someone to talk to.”

That has been the charm of living in Share Us for Cho Eun-bi, a 25-year-old who has been living in a three-person unit for two years. Cho is currently studying and preparing to land a decent job in Seoul.

“I am one of the most active tenants here. I like to mingle and attend events organized by Sunlab,” she said. “I’ve been living alone ever since I came up to Seoul when I was 20 and you get really lonely after several years.

“I really like coming down to the first floor and meeting others. Once we had a cooking event where the residents here and other adults in the neighborhood came together to cook together and eat afterwards, and I can’t forget that evening.”

Neighbors in the area can also access the community space by paying 10,000 won a month.

“Honestly, it is impossible to get a room for 350,000 won per month with this quality. The furniture is all new and the building is clean and you are entitled to large common areas,” said Cho.

Noticing the success of the share-house model designed by Sunlab, the Seoul city government decided to provide support to the firm to establish two more Share Us housing for young Koreans. Thanks to the government’s support, Sunlab was able to lease the buildings for Share Us No. 2 and 3 under 10-year contracts.

“This means that we are less prone to [being affected by] gentrification,” said Hyun. “For 10 years, there’s no need to worry about getting kicked out or the landlords raising the prices, which would force Sunlab to have no choice but to raise our rents,” said Hyun.

What about after 10 years?

Hyun says although Sunlab cannot entirely stop gentrification from threatening them, they “can persuade the landlords that it will be impossible for them to kick Sunlab out and operate Share Us on their own.”

“Because Share Us is designed in different units, one of the major jobs for the staff at Sunlab is to find the right kind of people who can live among one unit,” said Hyun.

“For example, in a three-person unit, we place residents with different lifestyles - like two students and one office worker - so they don’t have to fight for the bathroom in the mornings. While in the six-person unit, we tend to have residents in similar situations, like exam takers as they can study together and form a real community.”

Since the new Share Us locations are a part of the Seoul Metropolitan Government’s project to solve housing problems for young Koreans, Sunlab had to follow several guidelines, such as only renting rooms to young Koreans who are living below the halfway mark of the average income level in an urban area while keeping the price of each room lower than the average of other rooms in the surrounding area.

New tenants to Share Us No. 2 start moving in this month, while No. 3 is set to open in September.

“We are currently thinking about turning the basement floor of Share Us No. 2 into a public bar while making a rooftop garden in Share Us No. 3,” said Hyun, adding that they are working with another company to brainstorm ideas.

What troubles Hyun at the moment is properly educating the young residents, as many of them are not used to sharing their space and forming a community under one roof.

“We try to educate them that toilets can clog and the light bulbs can go out and that it is their job to solve such problems,” said Hyun. “At the moment, they seem to think we at the Sunlab are service providers and ask us to deal with those issues. We help them out the first time though.”