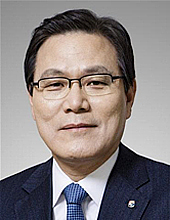 Shortly after he took over the chairmanship of the Financial Services Commission (FSC), Choi Jong-ku took on the job of spearheading internal reform, starting this week.

The move is intended to restore the reputation of the regulatory agency since the body has often been criticized for having an opaque decision-making process.

The Financial Services Commission formed a task force to lead the effort on Monday, which will operate for three months.

The task force is made up of FSC officials at different levels in order to draw in a range of views and opinions. Kang Young-soo, formerly from the financial market monitoring division, will take the helm. Also included are outside advisers including academics, industry experts and research institutes, the agency said.

The task force will be focused on improving the reporting system between officials and divisions of the agency. The FSC is known for having a multi layered reporting procedure that requires large amounts of paper work.

Choi has also demanded that officials simplify the system by shifting from document-based to verbal reporting and pledged to ditch unnecessary meetings with high-ranking officials.

“There have been criticisms about the FSC’s decision-making system, the responsibility of policy implementation and consulting practices with financial consumers,” said Park Jae-hoon, head of the human resources team at the FSC.

The task force will also look into the agency’s way of conducting organizational and personnel reshuffles and its oversight of financial companies.

To increase transparency, members will discuss the scope of the public disclosure of FSC documents containing meeting results and other reporting.

The unit will consider revealing the names of officials who made certain policies so that they can be held accountable.

The image of the agency recently suffered as Kim Sang-jo, chairman of the Fair Trade Commission, criticized the FSC.

Besides the internal reform, the Moon Jae-in administration is expected to change the structure and functions of the regulatory body.

In the five-year plan announced last week, President Moon pledged to execute an overhaul of the country’s financial regulatory system, which has been led by the Ministry of Strategy and Finance and the Financial Services Commission.

Meanwhile, Choi will announce the direction of financial policy today, aimed at achieving what he calls a production-oriented economy and financial inclusion.