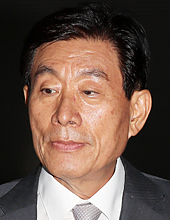 Transcripts of meetings at the country’s top intelligence agency discussing political operations were made public Monday as evidence in the trial of the agency’s former head, Won Sei-hoon, who is accused of meddling in the 2012 presidential campaign to help the ruling party candidate Park Geun-hye.

In one, Won urges his officers to practice “psychological warfare against the South Korean people.”

The Seoul High Court accepted the prosecution’s requests to accept the transcripts of the National Intelligence Service (NIS) meetings and an internal report of the service’s attempts to flood social networks with pro-Park propaganda before the election.

Won headed the NIS from 2009 to 2013 during the Lee Myung-bak administration. He was prosecuted in June 2013 on charges of running a cyber smear campaign against Moon Jae-in, the main rival of Park in the 2012 presidential election. Moon was narrowly defeated by Park.

The current trial is a continuation of Won’s original trial, which went all the way to the Supreme Court, which sent it back to the high court.

The transcripts contain Won’s remarks during the section chief meetings of the NIS from 2009 to 2012. The NIS recently offered the transcripts to the state and prosecutors made them public in the courtroom on Monday, asking for them to be submitted as evidence. The court accepted the request.

When the cyber-smear scandal was investigated in 2013, the NIS offered heavily edited transcripts without Won’s remarks. The transcripts revealed on Monday contained a series of explosive remarks by Won.

“The local chapters of the NIS must vet candidates to run in the local election [in 2010,” Won was quoted as saying in one transcript.

“Block articles [that are critical of the government] or run operations that will annihilate the media. Whenever they make mistake, it is the job of the intelligence agency to beat them up,” he said in another.

The court also admitted as evidence an internal report of the NIS on its operation on the social networks. The report was obtained by an independent counsel in 2011 investigating a cyber attack on the National Election Commission that year. The report was confiscated from a former official of the Lee Blue House, and it contained specific orders on how to run a cyber operation to sway public opinion by making postings on Twitter and Facebook.

The independent counsel team gave the document to the prosecution in 2012, but the prosecution did not use it against Won. After keeping it for years, the prosecution gave the report over to the Park Blue House with other sensitive documents in May 2014, while Won’s case was being tried in a district court. At the time, Hwang Kyo-ahn, who later served as prime minister in the Park administration, was the minister of justice.

“Won repeatedly mentioned the general election and the presidential election in his orders,” Prosecutor Lee Bok-hyun said Monday during the trial. “He clearly operated the [NIS] as a tool to assist the administration or the president.”

After President Moon vowed to reform the NIS to end its decades-long meddling in domestic politics, the NIS said on July 11 it would reinvestigate 13 controversial operations in its past. Among the 13 operations, Won’s case was named as the top priority.

In a closing argument, the prosecution said Won abused his power as NIS head to run domestic political operations and attack critics of the Lee administration and the ruling party by labeling them as pro-Pyongyang. The prosecution asked the court to punish him with four years in prison.

In December 2012, the Democratic Party claimed that government offices, including the NIS, ran an extensive cyber smear campaign against Moon. Police fueled the controversy by announcing the results of an initial probe clearing the spy agency on Dec. 16, three days before the election. After another investigation, which included a 13-hour raid of the NIS, Won was indicted by the prosecution in June 2013.

The initial ruling in September 2014 acquitted him of violating election law and only convicted him of breaching his responsibility to be politically neutral. In its ruling in February, the Seoul High Court convicted him on both charges and handed down a three-year prison term.

Meanwhile, the newly named prosecutor-general of the Moon administration, Moon Moo-il, said Monday that he will investigate why the prosecution gave the NIS report to the Park Blue House without looking into it.