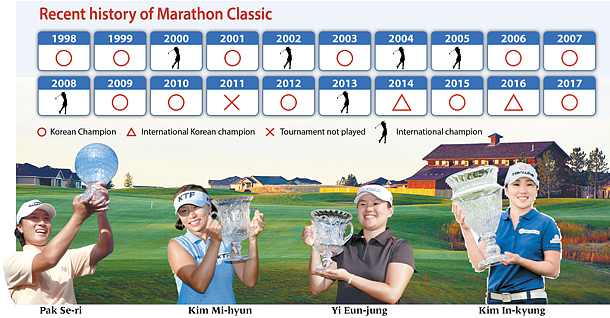 Ten years ago, it was considered a great achievement for a Korean golfer to win an LPGA tournament, but now Korean golfers dominate the tour every season, especially at the Marathon Classic.

Ohio has been called the “land of promise” by Korean golfers, as they’ve dominated the tournament for 19 years. Though the name of the tournament changed multiple times, it has been consistently played at Highland Meadows Golf Cub.

Pak Se-ri won the tournament five times throughout her career and Kim Mi-hyun won it once. And with Kim In-kyung’s victory, Korea continued its stride at Marathon Classic, having won it 11 times since Pak Se-ri first won in 1998.

In 2015, Chella Choi captured her first LPGA tour victory at the event, after playing in a total of 157 tournaments since her debut.

It is no exaggeration to say Pak played the biggest role in leading the success of Korean golfers. Pak participated at the event for the first time in 1997, as a non-LPGA tour member. At the time, she left to the United States with a goal of getting into the LPGA tour. Since Pak was not an LPGA tour member, she asked for an invitation to play in the tournaments and Jamie Farr granted it for the Marathon Classic.

Even worse, the course wasn’t the right fit for Pak. Highland Meadows is considered an old course, opened in 1925, with a short course and tight fairway lies.

By the end of the season, Pak earned a full-status LPGA tour card and won the U.S. Women’s Open. Pak was declared a champion after playing in a 20-hole playoff on Monday over Jenny Chuasiriporn, an amateur player.

The Marathon Classic, which is scheduled right after the U.S. Open, wasn’t in Pak’s tournament list for the season, but as Farr sent a private jet for Pak to travel, she ended up playing in it.

That might have been the best decision of Pak’s career, as the tournament in 1997 was the start of Korean golf history. Pak shot an even-par the first day, but with a 10 under par round on the second day, she quickly climbed up the leaderboard to win the tournament by nine shots.

“Since I was already playing in the tournament, my goal was to win,” Pak said.

The following year, Pak successfully defended her title. Of a total of 25 LPGA tour victories, 20 percent were from the Marathon Classic. Not only that, the five victories at the tournament played a significant role in leading Pak into the LPGA hall of fame.

With yet another success at this year’s Marathon Classic, Korean golfers now head to Europe for the next two weeks to play in Aberdeen Asset Management Ladies Scottish Open and the Ricoh Women’s British Open, the LPGA tour’s major tournament.

All four rounds of the Scottish Open will be aired live on JTBC Golf Channel starting at 10 p.m. tonight.