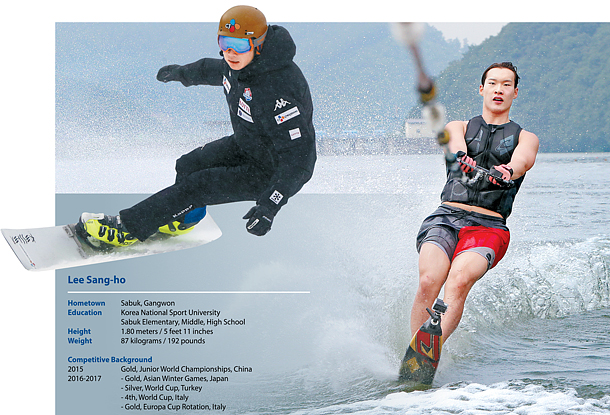 On the Idong Reservoir in Yongin, Gyeonggi, one Olympic hopeful has taken on a unique approach to summer training. Alpine snowboarder Lee Sang-ho, 22, wakeboards as a core element of his off-season training with less than 200 days until the start of the PyeongChang Olympic Games.

Since last year, Lee has wakeboarded weekly in order to maintain his skill level. Snowboarding and wakeboarding share numerous similarities which make the latter a crucial component of Lee’s summer training program. There is no closer sport to snowboarding in terms of muscle memory.

Two other alpine snowboarders, Kim Sang-kyum, 28, and Choi Bo-gun, 26, have joined Lee on the water.

Lee earned the nickname “cabbage patch snowboarder” early in his career. It refers to how Lee followed his father in their remote hometown of Sabuk, Gangwon, to snowboard for the first time on land which had originally been cabbage fields.

Despite his humble beginnings, Lee now enjoys the support of a full team including his own trainer and equipment managers.

“With systematic changes to the training system gaining support, I envy a lot of the Western athletes,” Lee revealed.

Lee’s 2016-17 looked promising in the lead up to the Olympics. Last December, he just missed the podium, placing fourth at the Snowboard World Cup in Carezza, Italy. This year, Lee won Korea’s first ever snowboarding gold at the 2017 Asian Winter Games in Sapporo, Japan and won silver at the World Cup in Kayseri, Turkey. Consistently producing strong performances, Lee hopes to become the first snowboarder in the country’s history to win an Olympic gold medal in PyeongChang.

Aside from Lee’s career as a professional snowboarder, he is a 4th-year student at the Korea National Sport University. Lee recently completed a four-week teaching program at Sabuk High School in his hometown.

“After winning silver at the World Cup, banners were placed all over my hometown,” Lee said. “Since I appeared on the news, the students recognized me and were incredibly welcoming.”

Even during the teaching program, Lee refused to neglect his demanding physical training. As part of his Olympic training regime Lee completes six hours of weight training daily to maintain his physical form.

“His body is in much better shape than it was last year. In addition, he has accumulated a lot of experience over the last season so naturally expectations are higher,” said Lee Sang-hin, the alpine snowboarding team coach.

On August 6th, Lee will travel south to train on snow for the first time this season in New Zealand. His goal for this year’s training program is to increase his speed while perfecting his movements in order to limit errors. Aside from his training on water, Lee is also focusing on his mental preparation.

“Every day I picture myself coming down the slope on the Phoenix Park Course before my opponent, and being crowned Olympic champion,” Lee revealed. “I believe that with enough preparation, success at the Olympic level can be achieved and will naturally follow.”