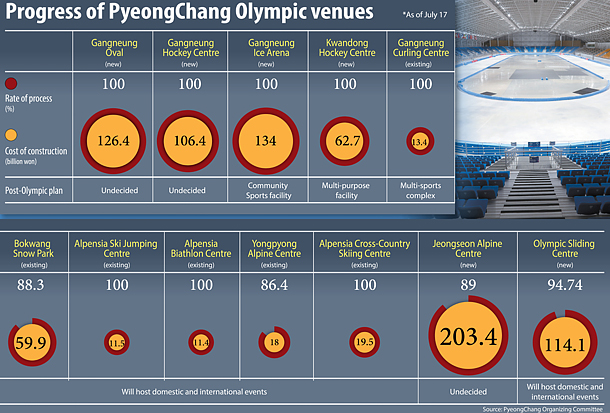 
There’s still half a year left until the 2018 Winter Olympics begin in Pyeongchang County, Gangwon, but already, local businesses are wondering how they can use the athletic facilities after the Games end.

One distribution company in February even asked the Gangwon provincial government if it could use the speed-skating facility as a refrigerated warehouse after the Winter Games.

The Olympic organizing committee built six new venues just for the Games around Gangwon Province. Of the six, three have tentative plans for use after the event, but they’re likely to make losses instead of profit. The other three - the Gangneung Oval, Gangneung Hockey Centre and Jeonseon Alpine Centre - don’t have plans yet for a post-Olympics life.

The Gangneung Oval, which will host the speed-skating events and which the distribution company asked to use after the Games, has two floors above ground and two floors below. There’s a double track 400 meters (1,300 feet) in length, and the space can hold 8,000 spectators. During the Olympics, fans will be able to see star sprinter Lee Sang-hwa gun for her third straight gold medal in the women’s 500-meter race there.

Originally, the Gangneung Oval was built to last only during the Olympics and would be torn down afterward. But following lengthy discussions, the Gangwon government and Olympic committee agreed in April to keep the venue. Recently, there have been suggestions to sell the property to a company that can remodel it into a convention center or water park.

Another suggestion was to turn the speed-skating facility into an indoor football stadium and make it the home of the local club Gangwon FC, similar to how the Sapporo Dome in Japan was turned over to the Hokkaido Nippon Ham Fighters, a baseball team, and Hokkaido Consadole Sapporo, a football club.

Some have recommended the Oval be used as the Korean national team’s training facility, but problems regarding distance from Seoul and maintenance fees arose. If the Gangneung Oval remains an ice skating facility, the annual maintenance cost would be over 3.2 billion won, according to a report from the Korea Industrial Strategy Institute, but annual income would only be an estimated 1 billion won. The Gangwon provincial government will have to eat the costs if it doesn’t find a private business to run the space.

The Gangneung Hockey Centre, located a five-minute walk away from the Oval, faces a similar debacle. The facility cost 106.4 billion won to build, but after the Olympics, there are no specific plans for what it will become, though Gangwon wants to retain the space.

The Ministry of Culture, Sports and Tourism had asked if the Daemyung Killer Whales, an Incheon-based hockey team, could make the Gangneung Hockey Centre its home, but the prohibitive five-year maintenance cost of 10 billion won and the ministry’s negative image from an influence-peddling scandal forced Daemyung to back out.

Of the six venues, the Gangneung Ice Arena, which will host figure skating and short-track events, is the only one expected to make an annual surplus of 200 million won after the Games. The arena will be turned into a multi-sports facility for local residents and include an indoor swimming pool.

“The Gangwon provincial government stayed silent when the PyeongChang Organizing Committee was building the facilities, but now that they see the problems regarding usage after the Games, they are asking the country to take over the responsibility,” said Lee Dae-taek, a physical education professor at Kookmin University in Seoul.

If all six facilities are maintained after the Olympics, the Korea Industrial Strategy Institute expects total maintenance to cost over 31.3 billion won a year. If they’re remodeled, they might bring in 17.1 billion won in revenue, but that means the rest of the cost will have to be covered by taxpayer money.

Previous host cities have factored in post-Olympics use in their facilities planning. From the start of construction, the city of Richmond had plans for the Richmond Oval, where speed skating events were held during the 2010 Vancouver Olympics.

After the Winter Games, the city removed the ice rink and turned it into a multi-sports arena with basketball and volleyball courts. It’s been averaging 200,000 to 300,000 visitors a year and maintaining annual profit of about 1.7 to 2.6 billion won.

The Thunderbird Stadium just outside Vancouver, where ice hockey games were held, is now used for concerts.