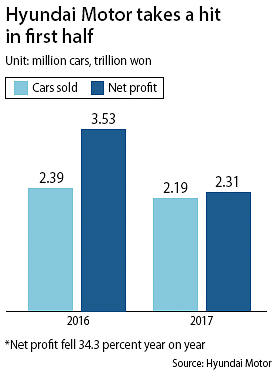 Korea’s top automaker Hyundai Motor suffered a drastic fall in earnings during the first half of 2017, its sales impacted by dismal performance in China as tension remains over the deployment of the Terminal High Altitude Area Defense (Thaad) antimissile system.

The automaker’s net profit for the second quarter plunged 48.2 percent year on year to 913 billion won, according to data released by the company.

“Due to some unexpected variations from overseas, our sales in China slowed down,” said the company in a press release, which added that earnings from the overseas market excluding China - the largest auto market in the world - improved.

The launch of new vehicles in the domestic as well as international - particularly Chinese - markets may turn the momentum around in the second half. Hyundai released the Kona, the company’s first small-sized sports utility vehicle, last month in Korea. It is also slated to launch the ix35 - an SUV made exclusively for China -later this year, in an attempt to move into the growing SUV market in the country.

Despite the new vehicles, the automaker is likely to face difficulties over the next few months that could impact both sales and production.

“It seems appropriate to anticipate Hyundai’s year-on-year performance will improve in the second half of this year due to various factors including the launch of new models,” said Lee Sang-hyun, an analyst from IBK Securities, in a recent report.

“However, in the case of a strike [by its labor union] and the Thaad issue situation failing to improve, concerns do loom that performance turnaround will be delayed.”

While the effect of a political row between Beijing and Seoul continues to haunt Korean companies in China, Hyundai’s labor union in Ulsan, home to the company’s largest Korean production plant, voted to go on strike after it failed to come to an agreement with management on wage and benefit issues.

The union is expected to go on strike after the official vacation in the first week of August.

Despite the weak performance, Hyundai decided to pay out interim dividends again this year, the third year the company has done so.