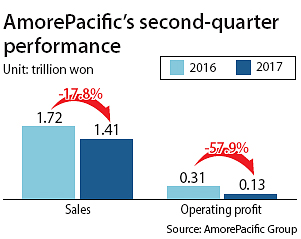 Korea’s two largest cosmetics companies, AmorePacific and LG Household & Health Care, this week reported sales declines in the second quarter, hurt by a fall in one of their largest customer bases, Chinese tourists, after the government in Beijing banned Chinese travel agencies from sending groups to Korea in apparent retaliation against a missile shield known as Thaad installed on Korean soil.

Combined with the first quarter, sales in the first half of the year totaled 3.3 trillion won, down 6.1 percent from last year. Operating profit fell 30.2 percent to 508.9 billion won.

“The continuing economic recession in Korea and the decrease in foreign tourists were the main reasons for the downfall,” AmorePacific Group said in a statement Tuesday.

The Chinese government’s ban on group tourism to Korea has largely affected cosmetics brands and duty-free stores, where group tours were a big source of revenue. The effect was most evident in sales of its main brand, AmorePacific, at duty-free stores, which fell 14.7 percent during the year’s first half.

The sales decrease on duty-free channels was especially stark, 26 percent year on year.

Despite the diplomatic row with China, LG Household & Health Care still managed to make a dent in the Chinese market with its luxury brands The History of Whoo and SU:UM37. Sales to Korean customers were upbeat as well, resulting in cosmetics sales during the first half rising 1.2 percent to 1.6 trillion won and operating profit jumping 5 percent to 325.4 billion won.

Unlike AmorePacific, where cosmetics account for more than 90 percent of its business portfolio, LG Household & Health Care also sells beverages and household goods, which helped bring the company’s total first-half sales to 3.1 trillion won and 492.4 billion won in operating profit. It was a record half-year performance.

The blow on Korean cosmetic brands was already anticipated when relations between Korea and China started to wobble because of Beijing’s dissatisfaction with a U.S. missile shield installed on Korean soil.

Between March and May, the number of Chinese visitors to Korea shrank 57.7 percent from last year to 841,952 people after the group travel ban went into place in March.