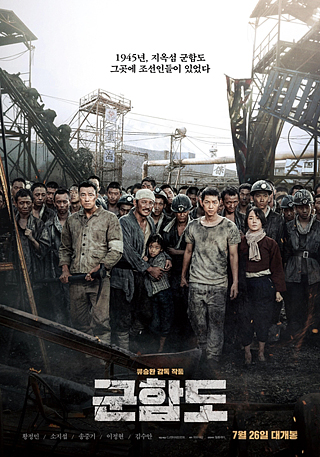 “The Battleship Island,” a local World War II film, is set to make an opening day splash on Wednesday, with nearly 600,000 tickets having been reserved on the release date.

The film, directed by Ryoo Seung-wan and starring Hwang Jung-min, Song Joong-ki and So Ji-sub, is expected to overtake “Dunkirk,” the current No. 1 film at the box office.

“The Mummy,” a Hollywood film starring Tom Cruise, holds the record for the biggest opening day performance in South Korea, drawing in 872,965 moviegoers on its premiere day. “Roaring Currents,” the highest-grossing film in the country to-date, was seen by 682,701 viewers on release day.

“The Battleship Island” is one of the more expensive South Korean films to-date. With a budget of 25 billion won ($22.3 million), the movie has to sell more than 7 million tickets to break even.

The movie has attracted attention since it was first announced for its depiction of the atrocities and ordeals faced by hundreds of forced Korean coal miners and sex slaves on Japan’s Hashima Island, nicknamed “Battleship Island” during World War II.