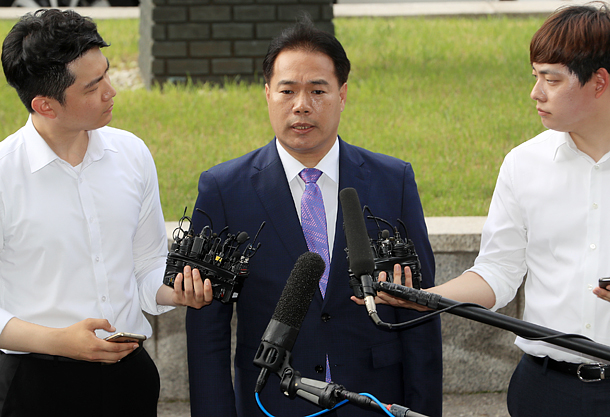 Rep. Lee Yong-ju of the People’s Party was summoned by prosecutors on Wednesday to answer questions on his possible involvement in a campaign scheme to smear President Moon Jae-in during his race for the Blue House. [YONHAP]

Rep. Lee Yong-ju of the People’s Party was questioned by prosecutors on Wednesday for his possible involvement in a campaign scheme to smear President Moon Jae-in at the height of his race for the Blue House.

“I will tell the prosecutors everything I know,” the first-term lawmaker told reporters on his way into the Seoul Southern District Prosecutors’ Office at around 3:50 p.m. Wednesday. “We did not try to deceive the public intentionally. I was not aware of the fact that we had fake evidence in the campaign.”

In an audio tape, a voice claims that during his time at the Parsons School of Design in 2010 he was friends with Moon’s son, Joon-yong, and that the son landed a full time job at a state-run institute in 2006 thanks to his father’s senior role in the Roh Moo-hyun Blue House. It turned out the voice actually belonged to the brother of Lee Yu-mi, a party member.

Lee Yu-mi also captured screen shots of a three-way group chat, which she alleged involved herself and two of Joon-yong’s friends from Parsons. In the chat, one person says Joon-yong had talked about getting a “free pass” into the Korea Employment Information Service. It was later revealed Lee Yu-mi typed all three parts in the chat using three different mobile phones.

The questioning of Lee Yong-ju is the first prosecutorial probe of a sitting lawmaker over the scandal. Lee was still being questioned as of press time Wednesday.

Lee was head of Ahn’s fair election committee and led the vetting of reports critical of rival Moon Jae-in. In the final days leading up to the election, Lee received the fake audio file and screen shots from Lee Jun-suh, another senior campaign aide.

Lee Yu-mi and Lee Jun-suh have since been detained for spreading false information. Lee Jun-suh, a close ally of Ahn Cheol-soo, was detained on suspicion that he let the Ahn campaign use the material even though he was aware it might have been fake.

Prosecutors reportedly assumed Lee Yong-ju was also aware of the possibility, which could bring about a criminal prosecution.

Two former senior aides who were questioned by the prosecutors over the scandal reportedly testified that Lee Yong-ju was not involved in the vetting of the material because at the time he was campaigning for Ahn in Yeosu, South Jeolla.

Lee’s questioning by prosecutors came two weeks after Ahn, the former party nominee, made his first official statement on the scandal, in which he apologized for the misstep. While he said he would take some time off in “self-reflection” of his past deeds in last five years as a statesman, he did not say he would retire from politics as a way of taking responsibility.