Pyongyang cracks down on embassy in Beijing for drama viewing

Pyongyang cracks down on embassy in Beijing for drama viewing 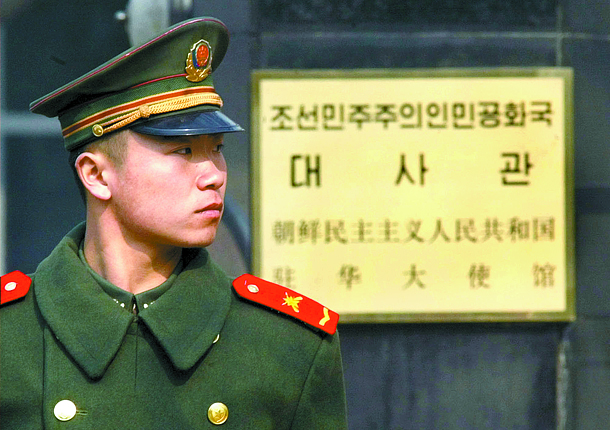 The North Korean Embassy in Beijing was recently raided by officials flown in from Pyongyang after a senior diplomat was caught watching a South Korean TV drama, frightening diplomats barely recovered from last year's headline-grabbing defection of Thae Yong-ho from the embassy in London.

According to a source who spoke exclusively to the JoongAng Ilbo, a team of North Korean officials from the State Security Ministry and the Central Committee of the Workers' Party of Korea arrived in Beijing "immediately" after they learned of the drama-watching diplomat in late June. They were alerted by a ministry official whose job is to keep an eye on the embassy staff.

The source did not say exactly when the delegation arrived at the embassy, which is North Korea's largest.

Apparently, all the North Koreans at the embassy, including diplomats' family members, are being investigated in the wake of the raid.
The team from Pyongyang is digging through their computers, hard drives, USBs and cell phones for any traces of South Korean material, and testing their ideological purity, the source said. A "myriad" of people were eventually caught in some kind of transgression.

The diplomat who triggered the probe was said to have been in charge of the embassy's light industry section, which is considered a very influential position in North Korea's foreign service, a former North Korean diplomat told the paper.

The Central Committee's ideology inspections can go so far as to check whether portraits of former leaders Kim Il Sung and Kim Jong-il, which are usually hung all over the embassy, are in perfect condition, the former envoy continued.

"They first take a look at the portraits, because any hint of their mismanagement would be a sign the embassy has gone completely off track," said the ex-diplomat, who requested anonymity.

Watching South Korean dramas or TV shows is strictly forbidden by the North, where the Kim Jong-un leadership conceives outside influence as a threat to the regime's ultimate power. Consequences run the gamut, with the most extreme case being public execution.
But many defectors have confessed to being motivated to escape their country after coming into contact with South Korean dramas. In cash-strapped North Korea, bribery is one means to escape prosecution after a guilty party is caught.

Thae Yong-ho, who served as deputy ambassador of the North Korean Embassy in London before defecting to South Korea last year, told local reporters in December that he didn't know anyone who hadn't seen South Korean dramas, adding that the regime was finding it increasingly difficult to keeps its nationals from watching them.