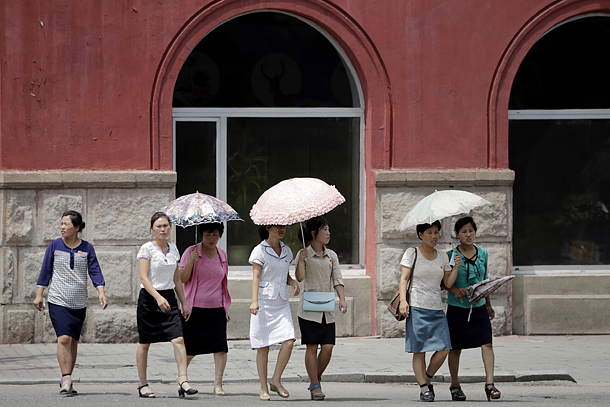 Women carry parasols as they walk down the street of downtown Pyongyang on Wednesday. [AP/YONHAP]

The U.S. House of Representatives on Tuesday overwhelmingly passed legislation that authorizes measures against exports of crude oil to Pyongyang as well as North Korean forced labor overseas and online gambling as part of a larger package of sanctions bills also targeting Iran and Russia.

The House voted 419-3 in support of bipartisan legislation referred to as the “Countering America’s Adversaries through Sanctions Act,” against Russia, Iran and North Korea.

This legislation encompasses the “Korean Interdiction and Modernization of Sanctions Act” on Pyongyang, passed in May by the House in vote of 419-1, which seeks to bolster the implementation of UN Security Council resolutions and cut off cash used for the regime’s weapons of mass destruction programs.

The bill penalizes anyone who “knowingly, directly or indirectly, sold, transferred, or otherwise provided significant amounts of crude oil, condensates, refined petroleum, other types of petroleum or petroleum byproducts, liquefied natural gas, or other natural gas resources to the government of North Korea,” with some exceptions for humanitarian uses.

China, Pyongyang’s main trading partner, is the main supplier of crude oil to North Korea, and Washington has been seeking to restrict oil exports to North Korea in the UN Security Council.

Amid other efforts to limit the flow of foreign currency that may be funneled into North Korea’s nuclear and missile programs, the bill prohibits the supporting of North Korean government’s commercial activities over the internet, including online gambling.

It also authorizes sanctions against people involved in the forced labor and slavery overseas of North Koreans and further prohibits “significant goods, wares, articles, and merchandise mined, produced, or manufactured wholly or in part” by North Korea from entering any ports of the United States.

The bill calls for a report assessing the extent of cooperation between North Korea and Iran related to nuclear and ballistic missile development, or their chemical or biological weapons development and conventional weapons programs. This bill also prevents U.S. President Donald Trump from lifting sanctions on Russia without congressional approval. It has been referred to the Senate.

Republican Rep. Ed Royce of California, chairman of the House Foreign Affairs Committee, told the floor, “These three regimes, in different parts of the world, are threatening vital U.S. interests and destabilizing their neighbors. It is well past time that we forcefully respond.”

“Believe me, these sanctions are going to have very real impact,” Royce told Fox News the same day. He pushed for cutting off “all the hard currency going into North Korea,” referring to Washington’s sanctions on the Macao-based Banco Delta Asia for its role in laundering money for North Korea in 2005.

“They didn’t have the hard currency to go forward. We need that kind of strength and action at this point in time.”

White House spokeswoman Sarah Huckabee Sanders said in a briefing, “While the president supports tough sanctions on North Korea, Iran and Russia, the White House is reviewing the House legislation and awaits a final legislative package for the president’s desk.”

She added, addressing the Senates’ Subcommittee on East Asia, the Pacific, and International Cybersecurity Policy, “I think the Chinese are now very clear that we’re going to go after Chinese entities if need be, if we find them to be in violation, and if the Chinese feel they can’t cooperate in going after those targets.”

The Donald Trump administration has been urging China to exert it unique leverage over North Korea as its main economic and diplomatic benefactor.

Thornton said, “But we are perfectly prepared to act on our own.”

While Washington has not relisted North Korea as a state sponsor of terrorism, the latest bill urges a reassessment, and Thornton said Washington is still reviewing this.