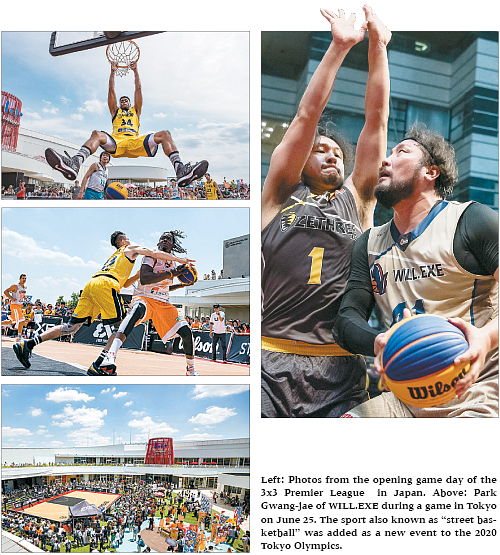 As a Korean resident living in Japan, Jeong Ryong-gi, 37, was a basketball player until the end of his college career. Now, he is both the owner and CEO of the Japanese 3-on-3 basketball team WILL.EXE, which competes at the highest level of the 3x3.EXE Premier league in Japan.

WILL.EXE is composed of former Korean national team player Lee Seung-jun along with Choi Go-bong, Park Kwang-jae and Shin Yoon-ha, who all played professionally in the Korea Basketball League.

WILL.EXE earned their spot on the 2020 Tokyo Olympics by winning the FIBA 3x3 Korea Tour 2017 in May, and since then, they’ve been working with the goal of representing the country in less than two years.

Although they may be the best team in the country, WILL.EXE has a long way to go, as Korea is ranked 61st out of 181 countries that have 3-on-3 basketball teams.

“From 3-on-3 basketball, I hope it brings back the popularity of Korean basketball,” Lee said.

In the recent World Cup, WILL.EXE finished 17th out of 20 teams, losing to the United States, the Netherlands and New Zealand.

“Including the yearly fee, transportation and accommodation fees, I spend about 50 million won [$44,860] per year,” Jeong said. “But I don’t have to spend money on paying the players or for any other operating expenses because the league covers it. And the uniforms are provided through our sponsor.”

The team trains in Seoul before traveling to compete in Japan on the weekends. The Japanese 3-on-3 league consists of 18 teams divided into East, Mid and West conferences.

The season runs from June to September with the teams competing across the country in an eight round tournament. The highest-ranked two teams from each conference then compete in the playoffs.

The 3-on-3 league is unique in that it doesn’t invite fans to watch teams compete, but it travels to compete where fans live. Games are played on boards that are placed all over the host city, from train stations to shopping malls and even historic buildings, and 3-on-3 games are incredibly fast-paced.

The court is half the size of a regular basketball court, and there’s only one net. Each team is allowed four members, and only three are allowed to play at once. The team has to score within 12 seconds after getting the ball and music is played throughout the match. Although 10 minutes are given in a game, once a team scores 21 points, the game ends.

And due to its potential, the International Basketball Federation (FIBA) played a significant role in turning it into an international sport. In 2007, FIBA standardized 3-on-3 basketball rules worldwide, and in 2010, they added the event to the 2010 Youth Olympics. After that, FIBA posted on their website, “from the streets to the Olympics,” celebrating their achievement.

Recently, 3-on-3 basketball has slowly increased in popularity, as the Korean Basketball Association (KBA) recently held a foundation ceremony on July 21. Kim Do-kyun, a physical education professor at Kyung Hee University, was elected as the first president of the association.