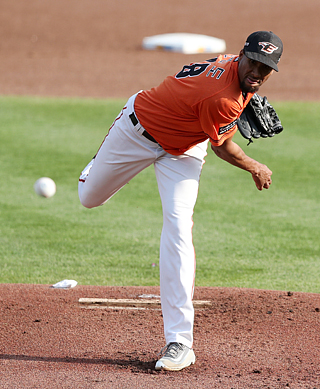 Alexi Ogando, pitcher for the Hanwha Eagles, throws during a KBO game. Despite his major league experience, he has not yet played up to expectations due to injury. [YONHAP]

Two of the bottom ranked teams in Korean baseball are headed in opposite directions with the second half of the season in full swing.

The Samsung Lions and the Hanwha Eagles have traded places in the Korea Baseball Organization (KBO) standings. The Lions became the sole team in eighth place in the 10-team league for the first time last Sunday, while the Eagles, mired in a seven-game losing streak, have slipped to ninth place as of Wednesday.

Make no mistake, these two clubs, along with the KT Wiz in 10th place, will most likely miss the postseason. But at least the Lions appear to be accomplishing something the two others aren’t - making life difficult for clubs with playoff aspirations.

To start this week, the Lions have taken the first two games in a three-game set against the NC Dinos, which came into the series on a six-game winning streak that got them within four games of the first-place Kia Tigers. 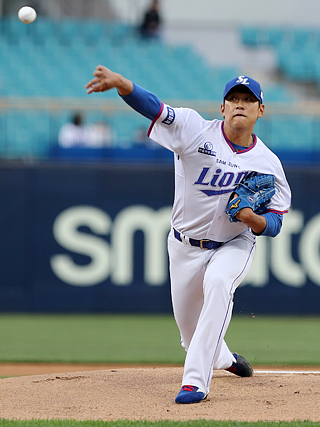 Yun Sung-hwan throws a pitch during a KBO game. Yun has been a great help in leading the Lions in the second half of the season. [YONHAP]

The Dinos now trail the Tigers by six games, having scored just two runs in those two losses to the Lions.

The Lions are just two years removed from their record-setting sixth straight Korean Series appearance. The bottom fell out for the once-proud franchise last year, as they finished in ninth place at 65-78-1, their lowest win total in seven years.

Things looked just as bad at the start of 2017, as they were sitting at 4-20-2 through the end of April. They were the only club that had failed to reach double figures in victories in the season’s first month.

Though their team ERA is still an unimpressive 5.59 for the season, ninth overall, they have performed better in July. They have a 4.02 monthly ERA, ranking second behind only the Lotte Giants this month.

Left-hander Baek Jung-hyun is finally offering some value to a team that drafted him 10 years ago. He has matched his career high with six wins in 26 appearances and has a 3.82 ERA in 26 appearances. In four games in July, Baek has gone 3-0 with a 2.77 ERA.

The Lions’ surge should make contenders sit up and take notice. Teams that might have circled the dates on their calendar for games against the Lions and considered them easy wins may now want to change their approach.

On the other hand, the Eagles, having dropped all seven games in the second half, are suffering through yet another lost season. Their last postseason came in 2007.

They hired veteran manager Kim Sung-keun before the 2015 season, hoping he’d turn the franchise around, but Kim was sacked in May.

Not a lot goes right for a team that loses so often but pitching in particular has been abysmal. During their seven-game losing streak, the Eagles have a 9.50 ERA, easily the worst in the KBO.

Two former major league starters haven’t offered much help. Alexi Ogando, acquired on a $1.8 million deal last offseason, was a solid 5-4 with a 3.26 ERA before he went down with a back injury June 10. He is eyeing a mid-August return.