Curry throws a three-pointer during a shoot-out contest at the gymnasium.[YONHAP]

Stephen Curry of the Golden State Warriors entered Jangchung Gymnasium in central Seoul on Thursday to the thunderous roar of 2,000 Korean fans.

The basketball star and his younger brother, Seth Curry of the Dallas Mavericks, were in Korea for the last leg of their Asia tour promoting the sports apparel brand Under Armour. The older Curry showed off his fast feet and slick skills in pick-up games with fans and taught younger players in small-session classes.

Curry then hosted a three-point shoot-out contest in which he donated 20 million won ($17,960) to charity.

“It was amazing to be here in Seoul and to see the fans,” Curry was quoted as telling the crowd on Yonhap. “We felt lots of energy in this building and hopefully everybody here enjoyed [it]. This is the day we’ll never forget.”

The basketball star landed in Korea on Wednesday for his first visit to the country. He is scheduled to host a private meet-and-greet at Under Armour’s flagship store in Gangnam District, southern Seoul, today and appear on the hit reality show “Infinite Challenge” before flying out tonight.

As one of Golden State’s biggest assets, Curry has quickly joined the ranks of Michael Jordan and Kobe Bryant as one of the greatest players in NBA history. The 29-year-old Akron, Ohio, native comes from a basketball-playing family. His father, Dell Curry, had an NBA career, though he was never considered a talented player. 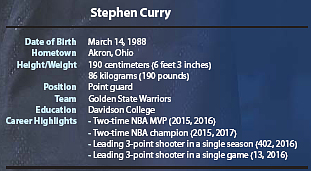 Among NBA players now, Curry is considered short, standing below 2 meters (6.5 feet), and like his father, he didn’t receive much attention as an amateur. Curry wanted to play basketball at Virginia Tech, his father’s alma mater, but wasn’t at a level to get there and instead received an offer to join the team as a walk-on.

Curry eventually enrolled at Davidson University, which had been aggressively recruiting him, and led its team to the Elite Eight at the 2008 NCAA Basketball Championships during the 2007-08 season, his sophomore year.

Following a successful college career, Curry joined the 2009 NBA rookie draft as the seventh overall pick and signed a four-year, $12.7 million contract with the Warriors.

Stephen Curry, a point guard for the Golden State Warriors, engages in pick-up games with fans as part of his Asia tour at Jangchung Gymnasium in central Seoul on Thursday. [YONHAP]

Over the next two seasons, Curry gained a reputation as a phenomenal perimeter shooter. In the 2013-14 season, he broke the team record for career three-pointers, averaging 24 points and 8.5 assists per game. The extraordinary performance earned him his first spot in the NBA All-Star game.

In the 2014-15 season, under the leadership of the Warriors’ new head coach, Steve Kerr, Curry led the team to its first NBA Championship title in 40 years. His unparalleled performance won him the MVP award that year.

The next year, Curry injured his ankle and the Warriors lost to the Cleveland Cavaliers in the NBA finals, but still, he managed to win MVP again by a first-ever unanimous vote.

The Warriors redeemed themselves the following year, capturing their second NBA Championship title with Curry on the team.

After the season, Curry extended his contract with the Warriors for another five years. He signed for $201 million, becoming the first basketball player in history to sign a contract exceeding $200 million.

Curry is famed for playing almost exclusively as a point guard. He is an outstanding free throw shooter, with an average exceeding 90 percent over his entire career. In his three-pointers, Curry uses an unorthodox jump shot that allows him to release the ball in under half a second. This gives the ball additional arc and makes it incredibly difficult for defenders to block.

“Your work ethic has to be strong and you’ve got to appreciate the opportunity to play basketball,” Curry told the crowd. “You need to meet a lot of great people and enjoy the game.”