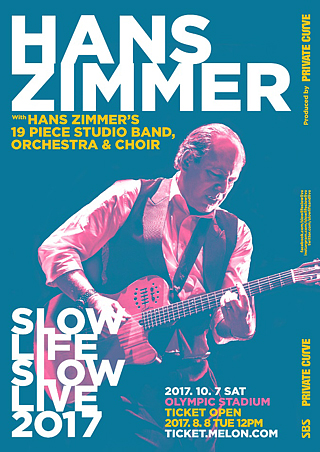 The accomplished film composer has managed to write film scores that live beyond the movies they’re in. Debuting in the 1980s, he first won the Best Original Score for “The Lion King” at the Academy Awards in 1995. He’s also behind the famous scores of “Inception,” “Pirates of the Caribbean,” “Interstellar” and the recently released “Dunkirk.” To date, the living legend is credited as a music composer in more than 150 films and has taken home a slew of Academy Awards, Golden Globe Awards and Grammy Awards.

Zimmer has sold out all of his shows since kicking off his European Tour in 2016. After a stop at Coachella, the world’s biggest music festival in April, Seoul is his first stop on his first-ever Asia tour.

A source from Private Curve, the organization behind the Slow Life Slow Live festival, said, “With Hans Zimmer, we will be able to show how music makes our life much more meaningful.”