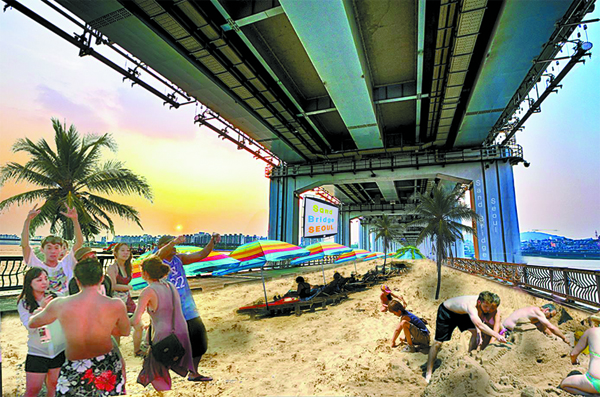 An imagined scene of the Jamsugyo Bridge Vacation, which runs through Sunday on Jamsu Bridge in Seoul.[SEOUL CITY GOVERNMENT]

The Seoul government has postponed the beach festival on Jamsu Bridge by about two weeks due to rain. The office said it will provide details on the schedule later.

Seoul’s Jamsu Bridge was initially planned to be closed to traffic this weekend and covered in 810 tons of sand in what the city government announced as an effort to turn the bridge into summer paradise for citizens who cannot get to the beach.

If the festival goes ahead as scheduled next month, 60 parasols and sunbeds will line across a 500 meter-long (1,640 feet) area, while a water slide 150 meters long will be set up on a nearby ramp. Food stands will be installed and music, dance and sand art performances will be available from evening onward.

“We wanted to offer a chance for people to enjoy their vacation in the city, without having to go far away,” said Baek Byung-hyun, an official from the Seoul Metropolitan Government, who is in charge of the event. “Last year, we set up a beach on the Han riverside. We’re taking it a step further this year, allowing participants to enjoy a panoramic view of the river by hosting the event on a bridge.”

Trucks from three ready-mix companies will collectively haul 810 tons of sand onto the Jamsu Bridge, after which 30 workers will evenly lay it out, according to the government office. Once the festival ends, the sand will be returned to each supplier.
More information about the festival in Korean is offered at http://seoulwalk.org/.