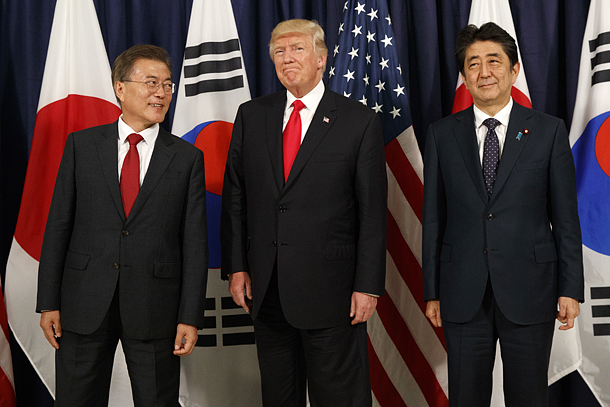 It’s a mystery why new liberal President Moon Jae-in expressed a commitment to the enhancement of South Korea-U.S.-Japan trilateral cooperation in security and defense after his first summit with U.S. President Donald Trump in Washington in late June. A week later, he reaffirmed the stance in trilateral talks with Trump and Japanese Prime Minister Shinzo Abe on the sidelines of the Group of 20 summit in Hamburg, Germany. Washington did not hide its pleasure, while Beijing was furious.

The tripartite alliance among Uncle Sam and the two East Asian economic powers was something Washington has long been nagging Seoul about. Even South Korea’s conservative leaders held back any pledge to a tighter tripartite alliance. When Washington demanded Seoul assert a common stance with the three nations after its conflict with China over its territorial claims in South China Sea, the administration under President Lee Myung-bak subtly toned down its statement to a desire for a “peaceful resolution” of the issue in fear of stoking unnecessary tension with Beijing. The administration under President Park Geun-hye also refused to assert three-way cooperation.

Therefore, it is stupefying to hear such an endorsement from Moon, an unrivaled critic of Japan. Moon’s aides argued that if the three countries form a united front on security, it would help North Korea, China and Russia to unite in a neo-Cold War framework. His administration’s officials claimed the alliance is restricted to a joint deterrence against North Korea’s threats.

But that would hardly convince Beijing. In a written statement, Moon and Trump said they would “work together to support and uphold the rules-based order in the Asia-Pacific region,” which could be stretched to underline Korea-U.S.-Japan joint actions to rein in China’s influence in the South China Sea. Beijing could go back to this issue over and over with Seoul, while Washington can use it to pressure Seoul to take sides with Washington over South China Sea disputes. Seoul has gotten itself in a sticky spot.

The aides on security and foreign affairs in Moon’s administration would surely have been aware of the downside. Why did they risk it? Aides reportedly had strongly opposed the endorsement. Yet the National Security Office pushed it, citing a “strong demand from the U.S.” This is how the alliance was specified in the joint statement.

The Moon administration could have yielded as it had been under multiple pressures — Trump threatening a surgical strike on North Korea, Washington’s disgruntlement over Seoul’s suspension of the full installation of the Terminal High Altitude Area Defense (Thaad) system, and the new government’s eagerness to win Washington’s endorsement for inter-Korean dialogue. Unsurprisingly, after his first summit with Trump, Moon highlighted that the two leaders agreed that the South Korean government should take the initiative to solve the North Korean nuclear problem through dialogue instead of military force. In short, Seoul has traded an alliance with Tokyo and Washington for peace on the Korean Peninsula.

It has been under liberal governments that Seoul gave big concessions to Washington. President Roh Moo-hyun dispatched South Korea’s largest number of troops overseas since the Vietnam War for a U.S.-led Iraq operation and endorsed construction of the world’s biggest U.S. army base in Pyeongtaek. The reason is understandable. Since liberal governments aspired to be more independent of Washington, they often irk our biggest ally and had to yield in a big way to not ruin the traditional relationship.

Moon has been smart in choosing the alliance with the U.S. But if actions suggest he is more tilted towards North Korea and China, he, too, could face a worsened relationship with the U.S. Moon must demonstrate he really meant it. He must back sanctions on North Korea as much as he wants to renew dialogue. By doing so, he could avoid big concessions to Washington later.