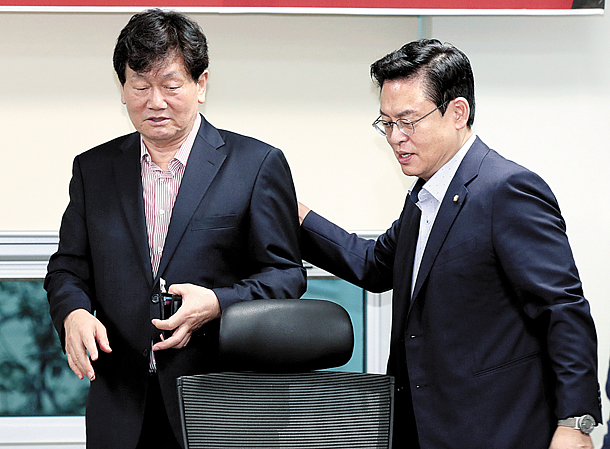 “It is like shutting down the safest among the country’s 29 nuclear reactors,” Lee said. “Many Korean nuclear technicians will move overseas, and we will see the end of exported Korean nuclear-power-related technologies.”

The 70-year-old expert is credited with developing Korea’s nuclear power plants. He succeeded in designing a nuclear power plant in the early 1990s, driven by his passion for independent technology. An upgraded version of his power plants was exported to the United Arab Emirates in 2009.

“If the country stops the nuclear power projects, about 360 technicians specializing in Korean nuclear power plants will be scouted overseas,” Lee said at a special lecture held by the opposition Liberty Korea Party at the National Assembly. “They are very talented scientists who developed Korean nuclear power plants to help the country overcome a shortage in energy and to keep it from falling behind in technology. They now feel insulted, like they are being treated as sinners due to uncertainties rising from recent incidents.”

He said the Shin Kori 5 and 6 reactors were designed to be perfect after studying extreme cases like Chernobyl and Fukushima. “The government plans to reduce the risk of nuclear-related problems by cutting down the number of power plants, but won’t they have to shut down the Kori 1 and Wolsong 1 reactors, which were built during the 1970s and ’80s?” he asked.

Some worry that Korean nuclear power plants are so close to each other that an accident from one could spread to others nearby. However, Lee explained this was not the case.

“It doesn’t matter how many nuclear power plants are in the region,” he said. “What matters is whether they share the same safety facilities and equipment. Korean plants never share such facilities, and I think Korea’s nuclear industry has grown enough to stop talking about such childish things.”

Lee added that previous liberal administrations like Kim Dae-jung’s and Roh Moo-hyun’s also wanted to stop building nuclear power plants, but later decided to expand the number instead. “Those ruling parties tried their best to stop building nuclear reactors, but they eventually realized they had no option but to build them,” he said. “According to my experience, the administration after Moon’s, even if it is a liberal one, will also continue to build them.”

Lee also said replacing nuclear energy with energy from renewable sources is unrealistic at this point.

“It takes a lot of money and land to build sources of renewable energy, as well as research on the topic,” he said. “I think people will be more comfortable only if the government cuts its dependence on nuclear power plants after renewable energy technologies have been developed, instead of lowering the number of nuclear reactors first and then developing renewable energy sources.”